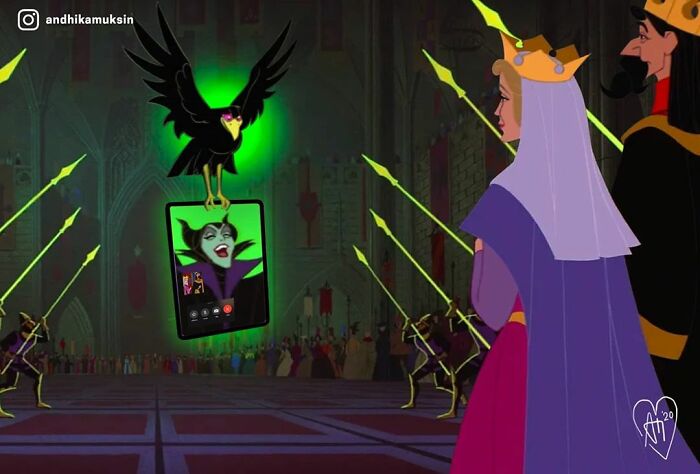 We tend to romanticize Disney characters. We see them as someone to look up to. But what if becoming just like them was way easier than we think? What if they were just like regular people with regular quirks, regular mannerisms, and regular problems? That’s the question that Indonesian Photoshop artist Andhika Muksin (previously) is answering by inserting Disney princes and princesses into real life and imagining what would happen. It’s time to take our rose-colored glasses off. 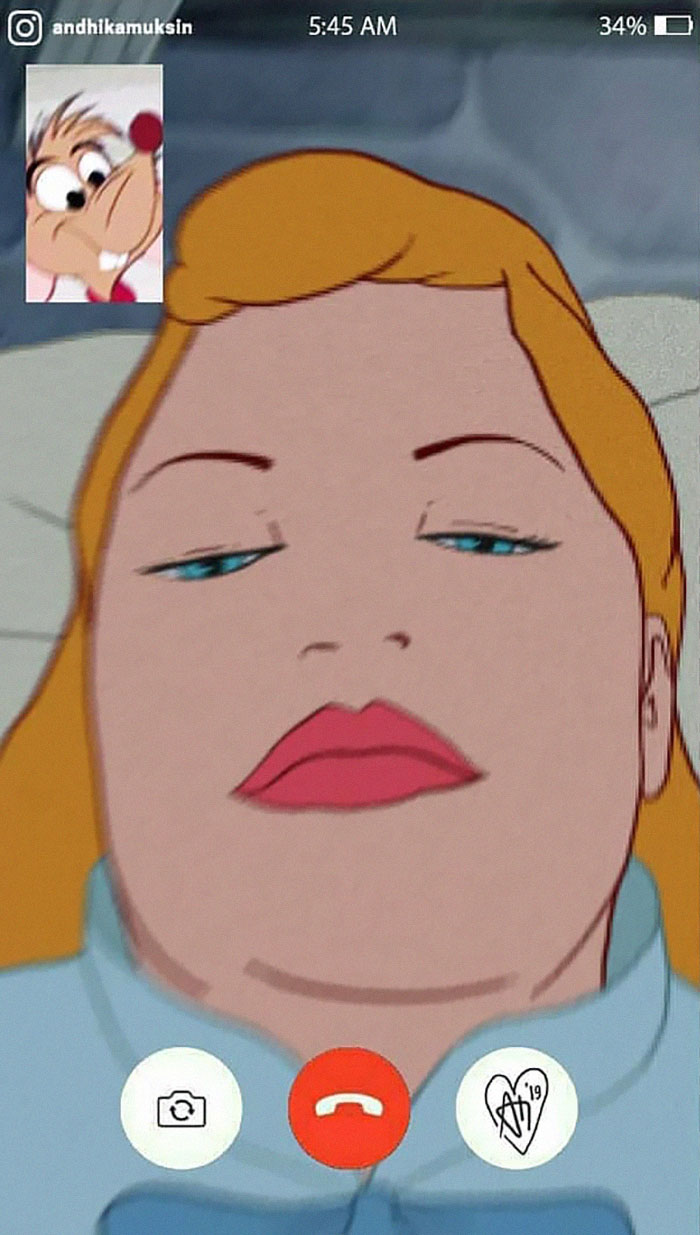 This is Disney like you’ve never seen before, so scroll on down, and upvote your fave pics. Let us know which of Muksin’s creations you enjoyed the most and why! And don’t forget to check out the artist’s social media accounts for his latest uploads and his TikTok to see how his artistic process. 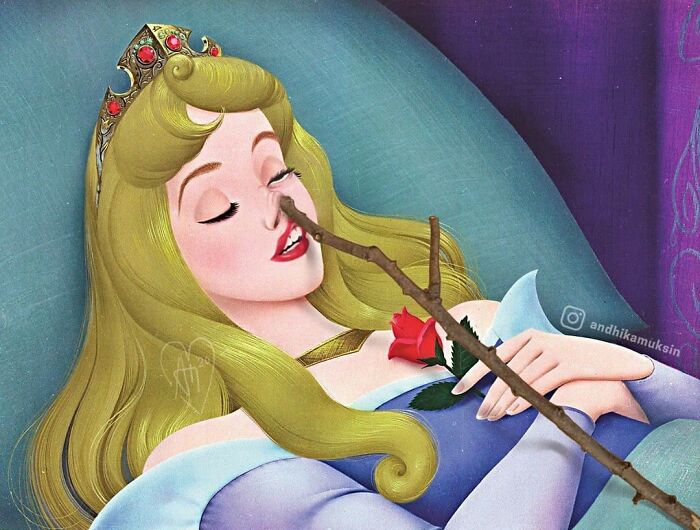 Muksin told Bored Panda that some of his ideas come to him “fully packaged” and as finished concepts that just need to be drawn. However, his other ideas come in bits and pieces that need to be “marinated” before they can be realized. “That’s why I keep a log of all my ideas that come to my head. More like a journal or diary but for my art.”

“We All Have That One Friend…” 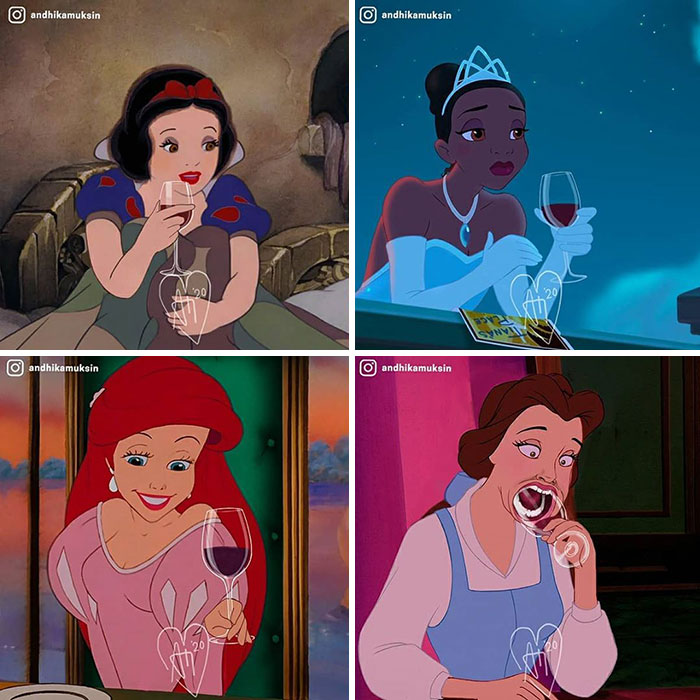 Muksin revealed to Bored Panda that finishing each picture can take a very different amount of time and it depends on a lot of factors. While some pics can be finished in an hour, others take days. “But never more than 3 or 4 days. This usually happens If i didn’t like the result, and keep reworking it until I’m satisfied,” the artist said.

“Cats Are Arseholes Every Cat Owner Will Agree”

“I’ve always wanted to be an artist/illustrator but not specifically a digital artist. I had an acrylic painting phase back then, but now Photoshop is just a preferred tool,” he shared. The artist added that over the last 15 years as an artist, he’s learned that the journey to finding one’s artistic style is as important as letting it all go for the sake of experimentation. He added that we all need to shake things up artistically from time to time.

“That’s What Meghan Should Have Done” 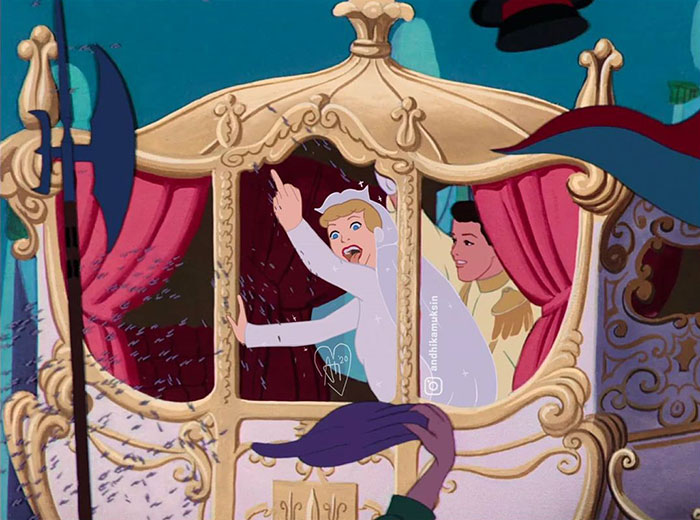 Muksin adores Disney, but he doesn’t just reimagine the characters from the animated films into realistic situations. He also photoshops princesses like Ariel, Pocahontas, and others, into celebrity photos.

The artist revealed to Bored Panda in an earlier interview that his love for Disney started in early childhood when he got a VHS tape of Alice in Wonderland as a birthday gift when he was just 5 or 6 years old.

“I was obsessed with it. I would watch it almost every single day after school. Not long after that, the Disney Renaissance era started, the obsession became a bit out of control and cemented my status as a Disney fanboy,” Muksin said and some of us can definitely relate. 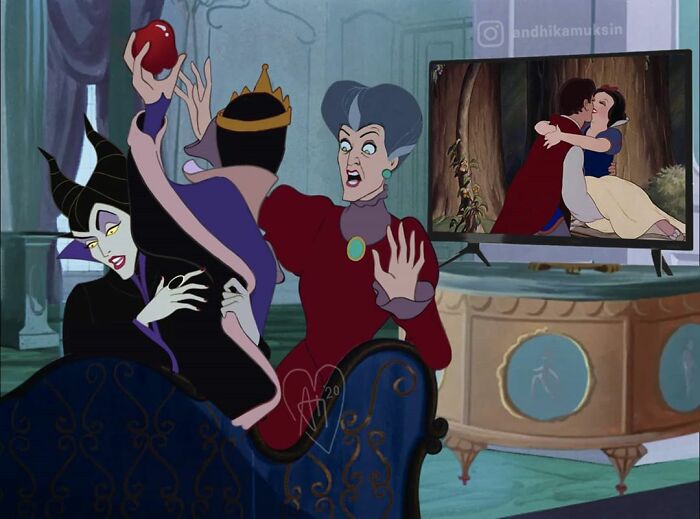 Ever since then, Disney characters stuck with Muksin. Naturally, he wanted to make fan art of the characters. “But instead of ‘remaking’ them in my own aesthetic style, I put a naughty twist on them. Over time, as I kept posting my Disney characters in real life stuff, I noticed that more and more people re-shared them on their Instagram, and I got more and more positive DMs and comments as well. So I guess people liked them.”

“Snow White Is Not Having It. Nope” 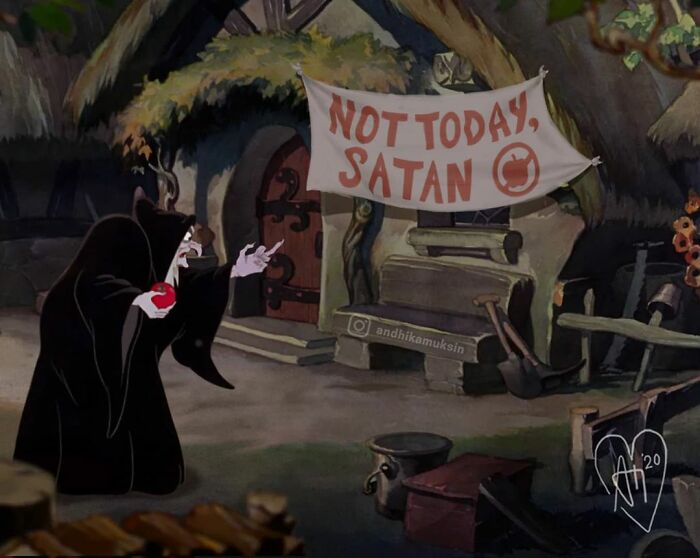 But how does Muksin choose which characters to reimagine? According to the artist, he gets new ideas for his projects completely randomly. He also believes that we all tend to relate to Disney so much because we’ve grown up with the characters we see on the screen.

“These characters are constantly revitalized through wide arrays of innovations. From Broadways, Disneyland rides, merchandise, and now Live Action remakes. These things brought them to iconic status. So I guess they blend so well with our everyday life because they are so well known,” the artist explained. 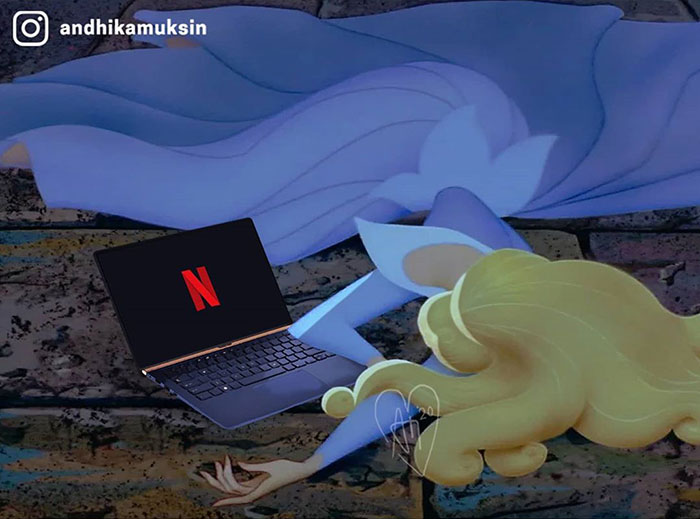 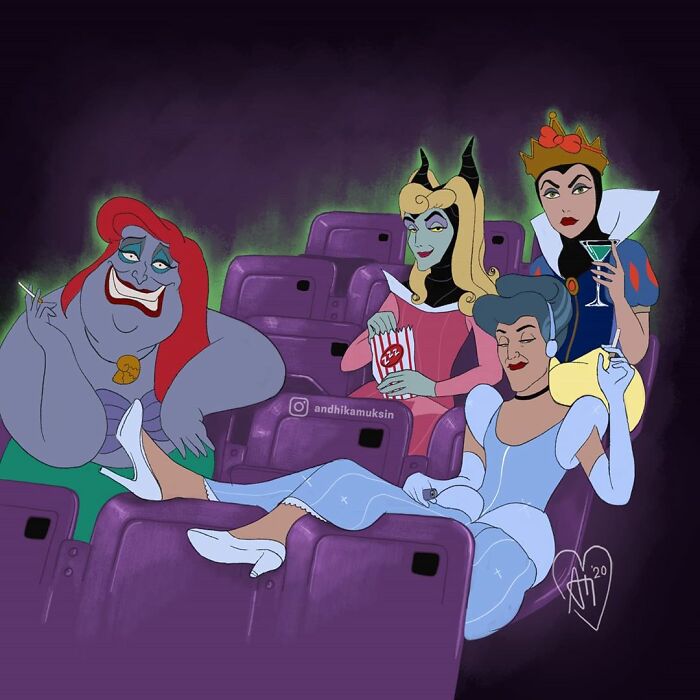 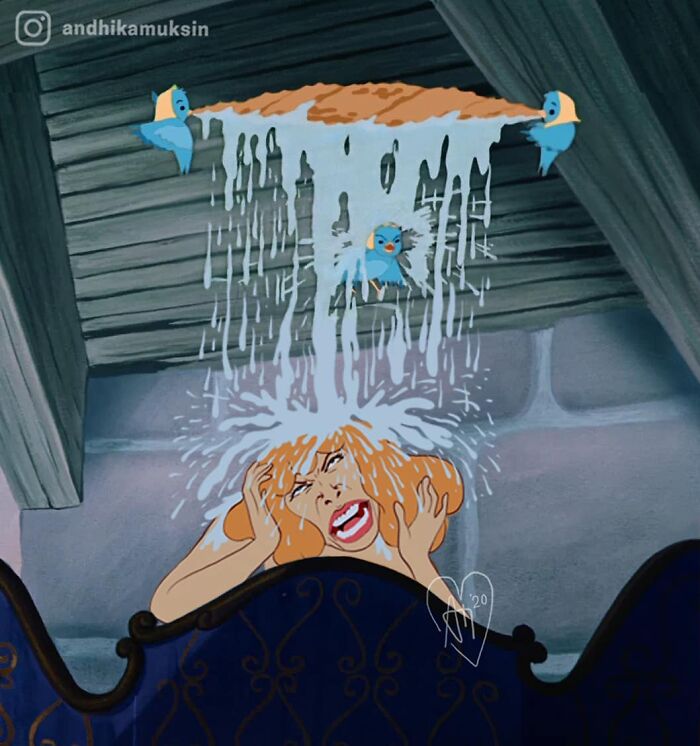 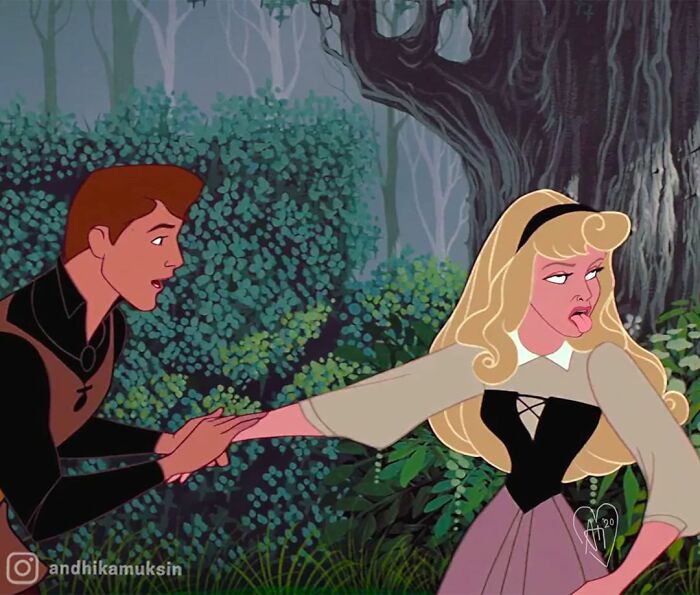 “Day Xx Of Quarantine. Doing The Flip The Switch Challenge Challenge And Found Out That Your Boyfriend’s Make Up Game Is Better Than Yours” 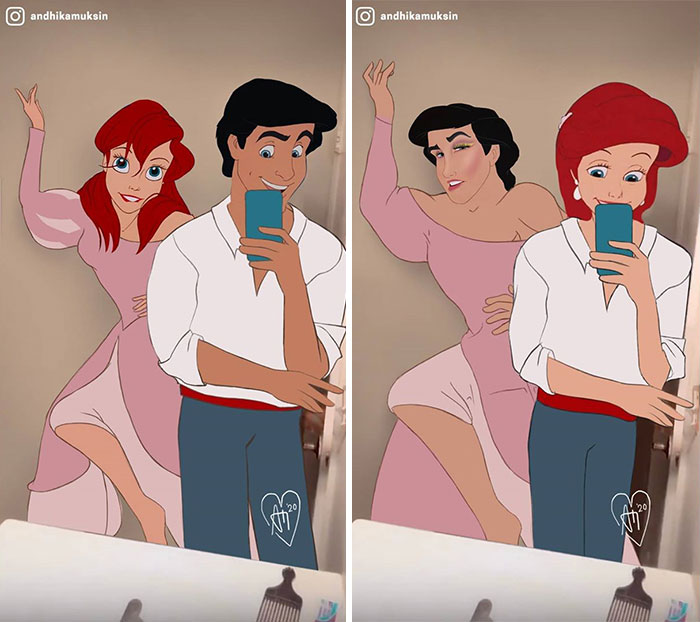 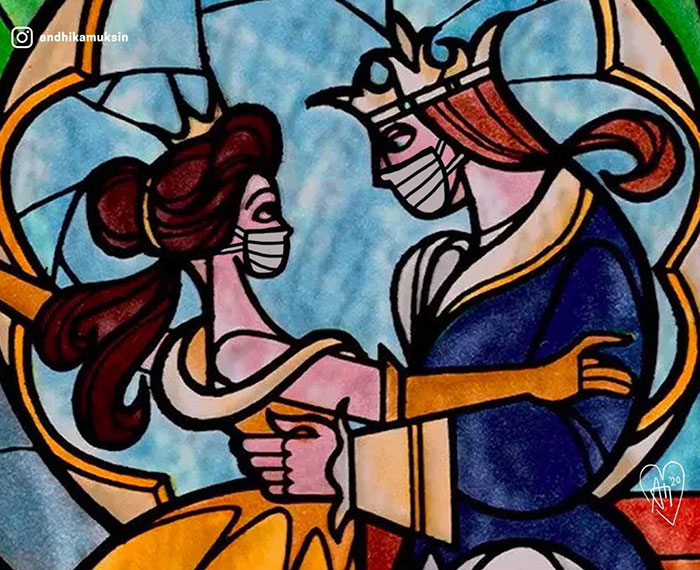 “Ugh…it’s That Annoying Dude From The Land Again” 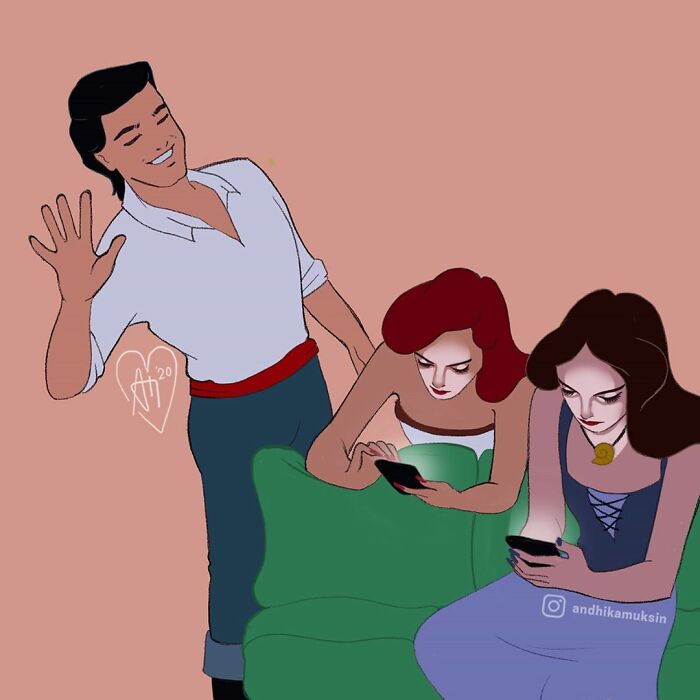 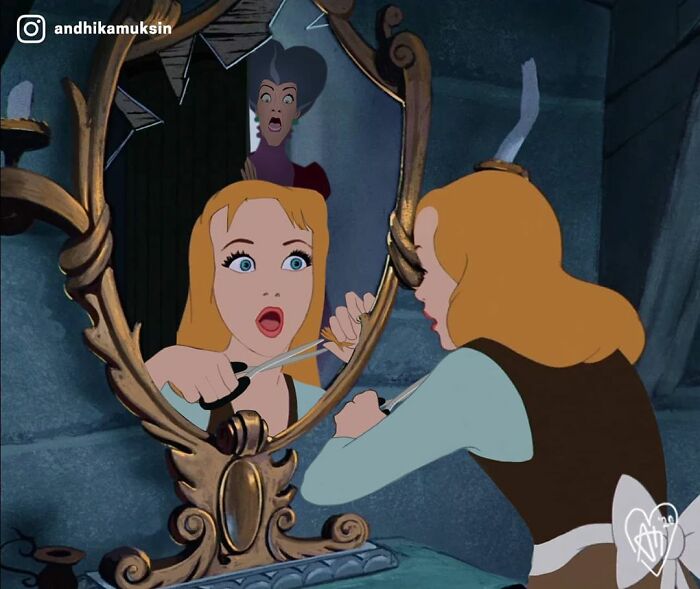 “My Kind Of Friday” 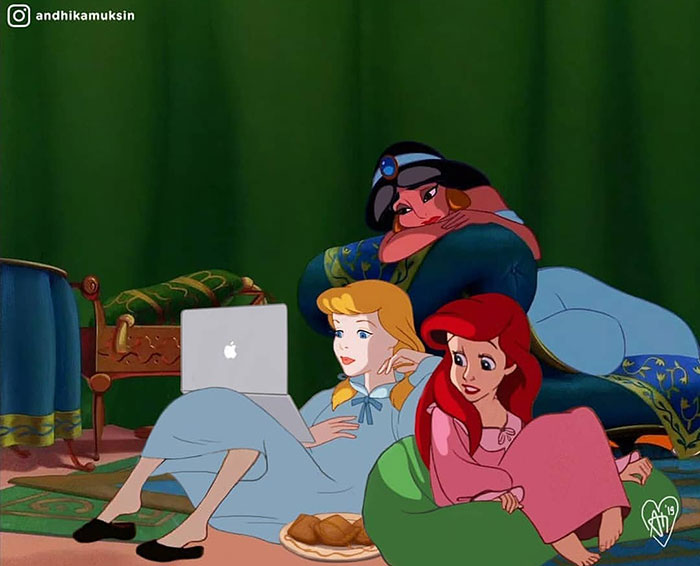 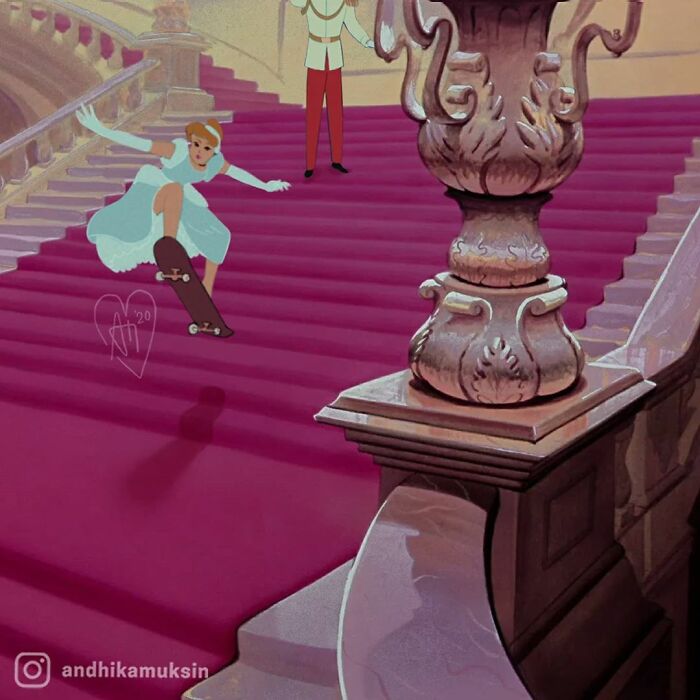 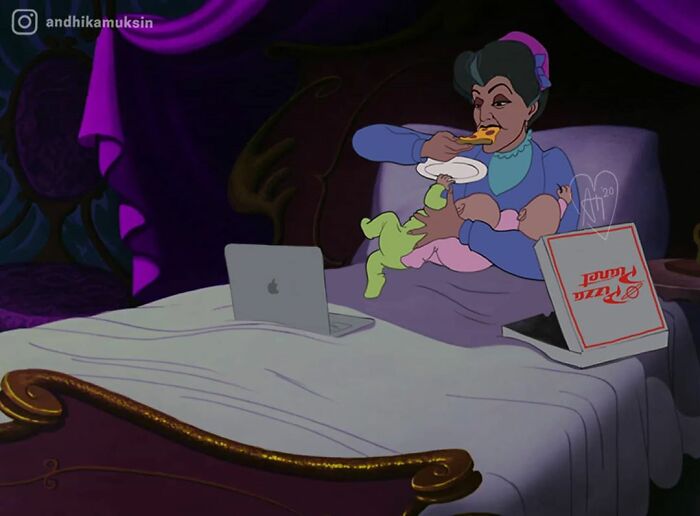 “Whatever Happens In This Zoom Meeting, We May Never Know…” 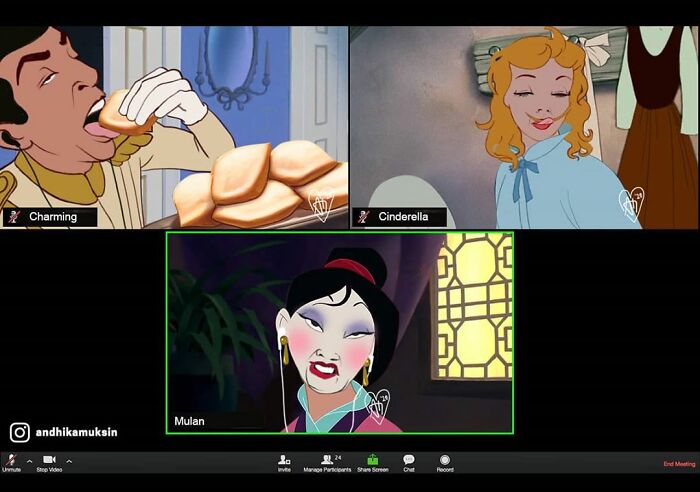 “If You Were Ariel, Which One Would You Do?” 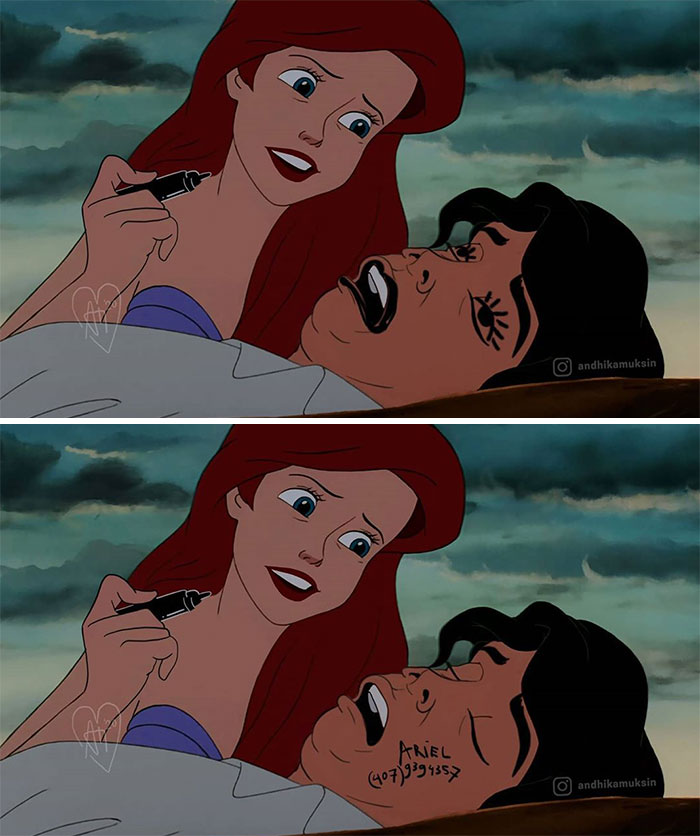 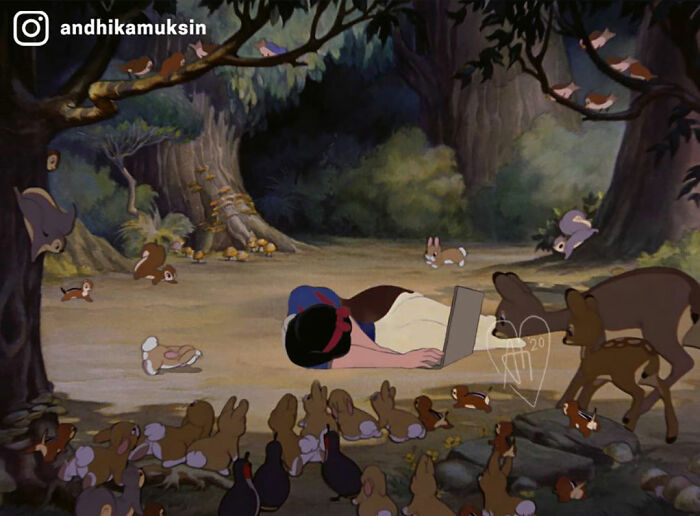 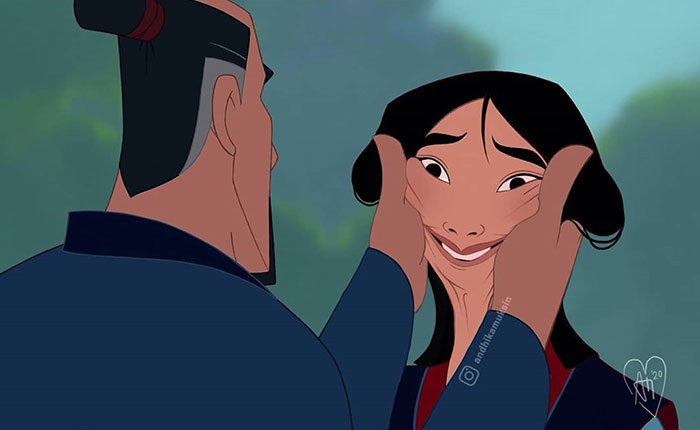 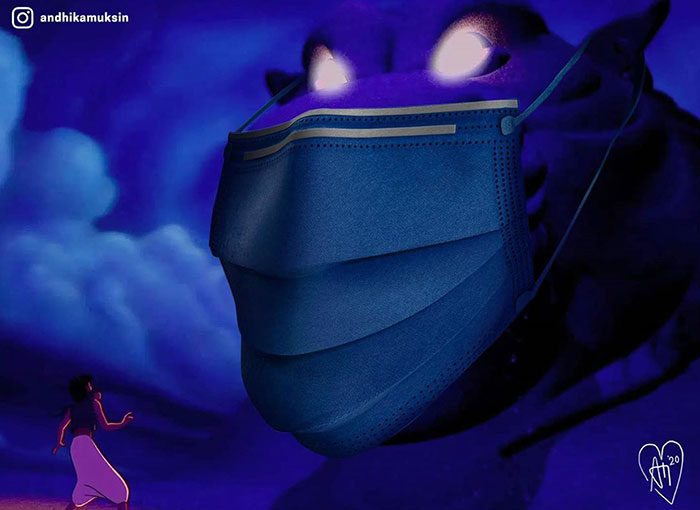 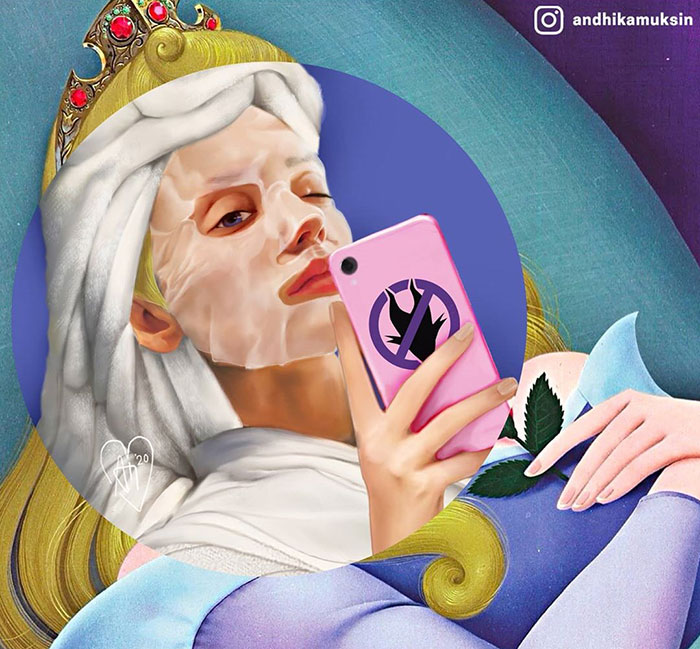 “When Your Prince Finally Here” 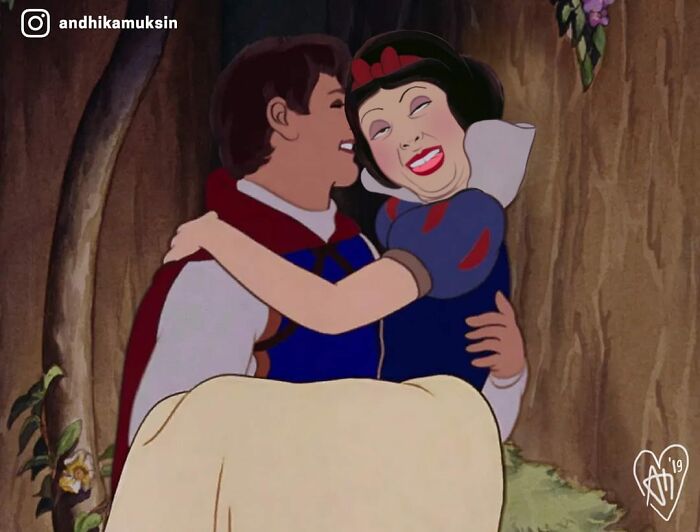 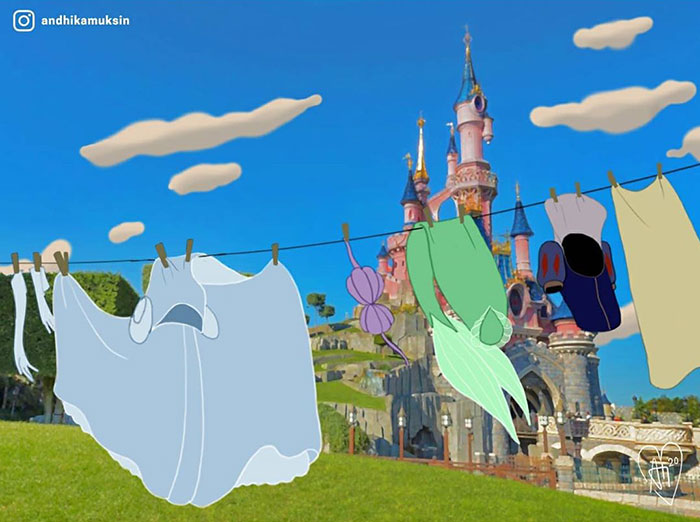 “Zzzrella… It Was A Long Journey To The Ball Anyway” 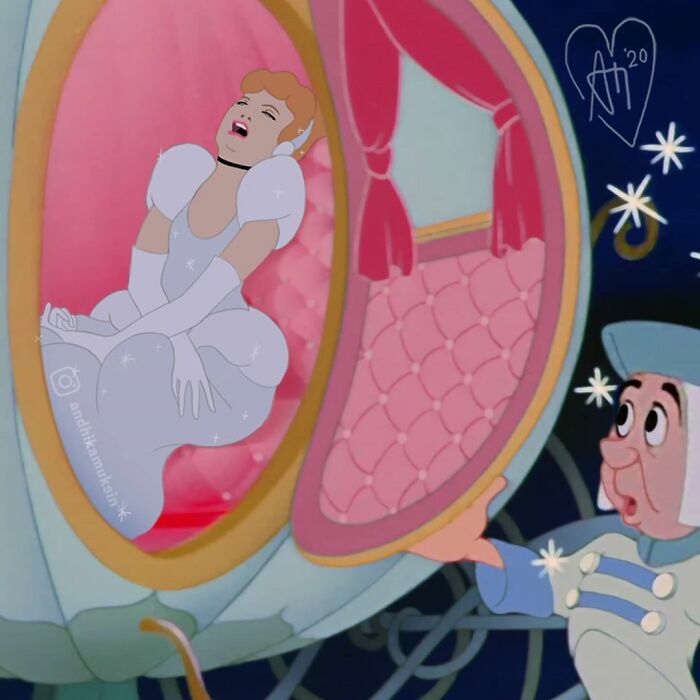 “When You Realized It’s Already Monday” 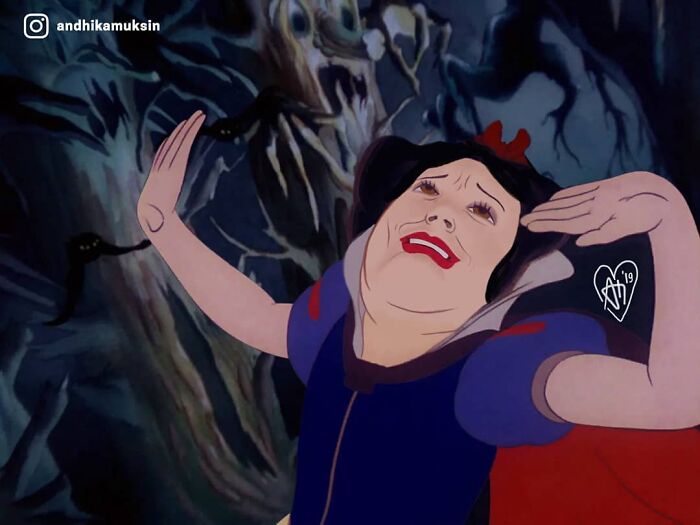 Our Dystopian Future in Dark Cyberpunk Artworks of Nagafujiriku
Construction Worker Hides Waldo On Site Everyday For Kids In Hospital Next Door To Find
"Future Utopia": The Supercool and Detailed Illustrations by Ori Toor
Artist Makes Semi-Realistic Fanarts Of Pop-Culture Characters
The Anatomy Of The Songs Graphically Explained By Artist
Death, Despair And Bloodborne: Superb Art By Rob Bowyer
'Hong Kong is Not China': Artist's Illustrations Go Viral
Insidious Goblins, Cute Elves, and Magic: The Gathering Cards - Fantasy Art by Jesper Ejsing
Soundbrick Bluetooth Speaker + Free Shipping!
"Everything Was Beautiful And Nothing Hurt": Stunning Concept Art Works By Olga Orlova
"Salt In Your Wounds": The Astonishing Fantasy Works Of Zeen Chin
17th Century Italian Wine Windows, Which Were Used During the Plague, Are Open Again Due to The Coronavirus Pandemic
There Are Only Two Kinds Of People In This World
The Double Standards Of Our Society Revealed In 47 Comics
Disney Princess Lingerie Sets Are Here, And You’ll Either Love Them Or Hate Them
Explaining The Worst Pandemics In History
A Guy Re-made Photos of His Deceased Wife with His Daughter
The Day The Earth Stood Still: Post-Apocalypse Worlds Of Michal Karcz
Theme Park Covers Topless Mermaid Statues With Bronze Tops In Effort To Become 'Family Friendly'
"Not Longer Life": 6 Classic Painting Reinterpretations That Reflect On Consumer Society
Artist Shows Us What Famous Characters Would Look Like In Real Life
Stunning Figurative Oil Paintings by American Artist Malcolm Liepke
Incredible Street Art by Remo Lienhard
One Nail - One Death: Monument to the German Victims of COVID-19 in Münster
2020, cartoons, coronavirus, disney, humor, lockdown

This Artist Gives Free Tattoos To Survivors Of Domestic Violence
Edible Anus Company Makes Chocolate Buttholes, And People Are Actually Buying Them
Vegetal By Nature: When An Artist Is Styling Statues With Flowers
Retro And Futuristic Illustrations By James Gilleard
Actor Edmond Kok Crafts Masks Inspired by COVID-19 Pandemic & Hong Kong’s Political Problems
In Russia, Girls Ready For Exams!
These Surreal Landscapes Look Like They Are From Another Planet
Woman Uses Her Hijab To Turn Herself Into Disney Princesses, Fiction And Comic Characters
This Instagram Account Has The Most Adorable Way Of Reminding You That You Matter
Stuck In The Real World: Characters From Cartoons And Movies Placed In Real Photos
2007 ‒ 2023 by Design You Trust. Proudly hosted by WebHostingBuzz.
Privacy Policy · Terms of Service · Content Removal Policy ❤️ 🇺🇦