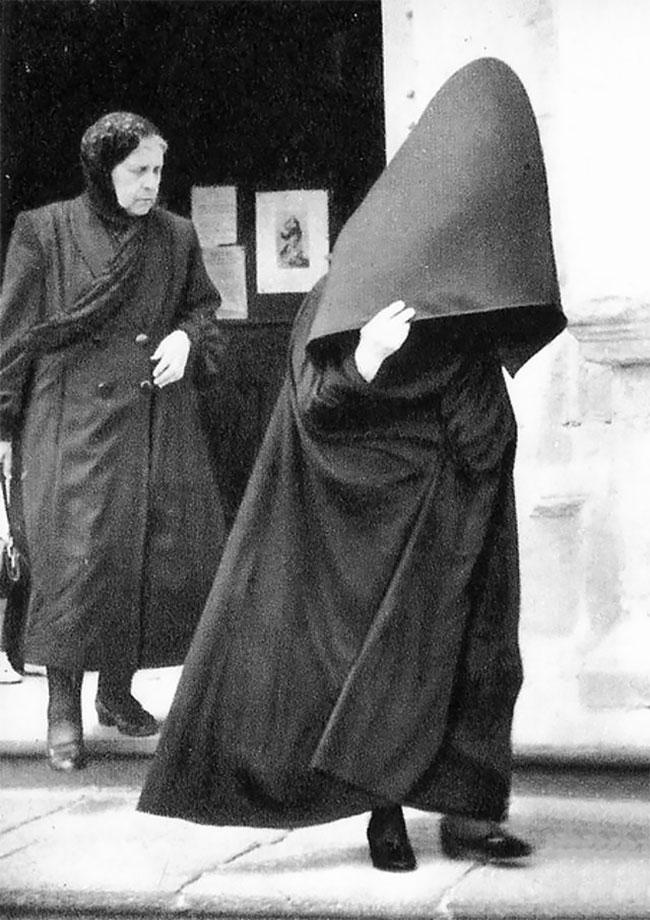 The Azorean hood (in Portuguese, ‘capote e capelo’) is a traditional Azorean garment worn up until the 1930s. A large cape that covered a woman’s figure, allowing only a glimpse of her face, the origin of the ‘capote-e-capelo’ is controversial. Some say that it came from Flanders and others state that it is an adaptation of mantles and cowls that were fashionable in Portugal in the 17th and 18th centuries. Regardless, for centuries the ‘capote-e-capelo’ was a typically Azorean woman’s garment used in Faial. 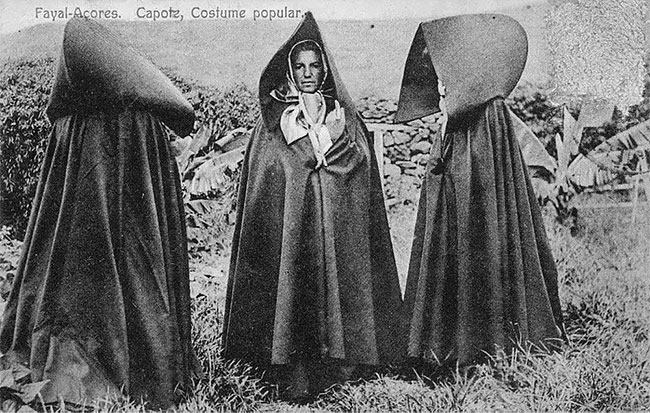 Varying from island to island in the cut of the cape and the arrangement of the cowl, Faial had the extravagant shape of a wedge resting on the shoulders and which jutted out in front for over a palm. The common characteristic of the ‘capote-e-capelo’ was that it was made of a strong, heavy electric-blue cloth that lasted for generations and was handed down from mothers to daughters. 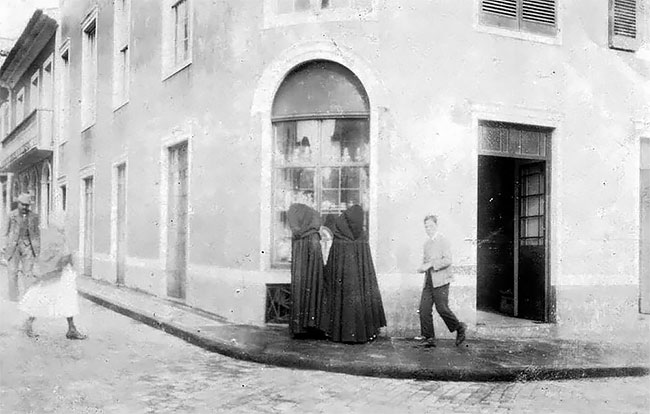 People from Flanders settled in the Azores beginning in 1450. By 1490, there were 2,000 Flemings living in the islands of Terceira, Pico, Faial, Sao Jorge, and Flores and because there was such a large Flemish settlement, the Azores became known as the Flemish Islands or the Isles of Flanders. The settlement extended over the 15th and 16th centuries with Flemish, Genovese, British and French joining the people of Portugal mainland in the Azores islands. 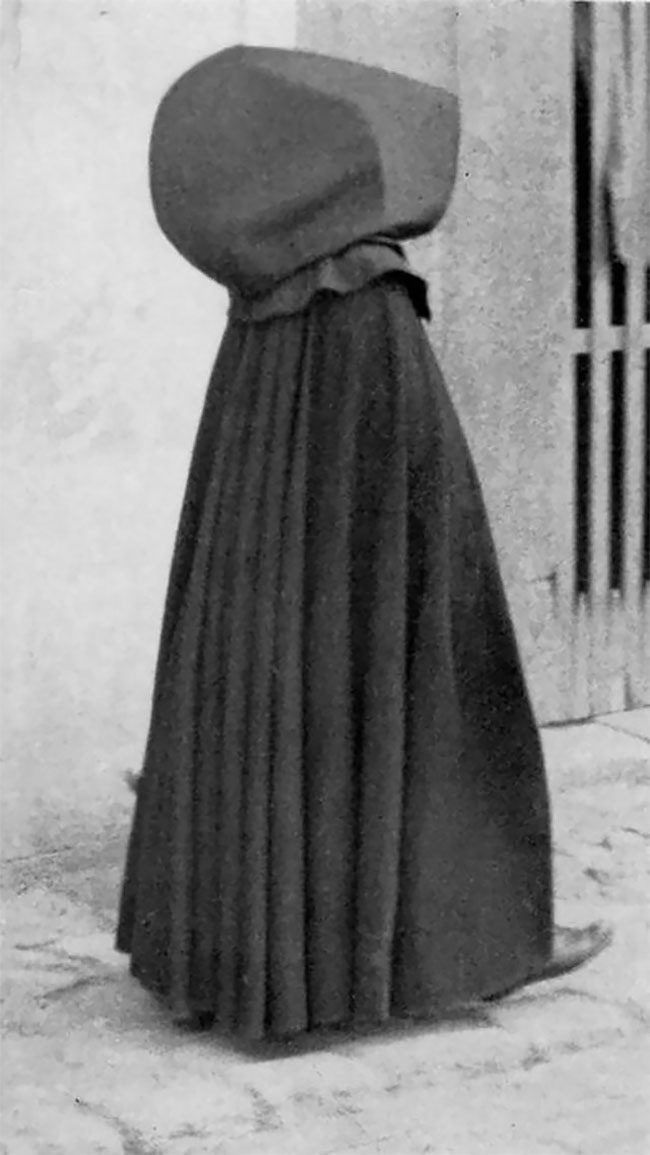 Besides other cultural contributions, the foreigners introduced woad in the islands. Woad was a yellow-flowered European plant of the cabbage family. It was formerly grown in Britain as a source of blue dye, which was extracted from the leaves after they had been dried, powdered and fermented. The export of this dye plant became one of the pillars of the Azorean economy. Whaling also played a central role in the economy of the islands. The first documentary reference to the capture of whales in the waters of the Azores goes back to the 16th century and the presence of English whalers was documented in the 18th century. 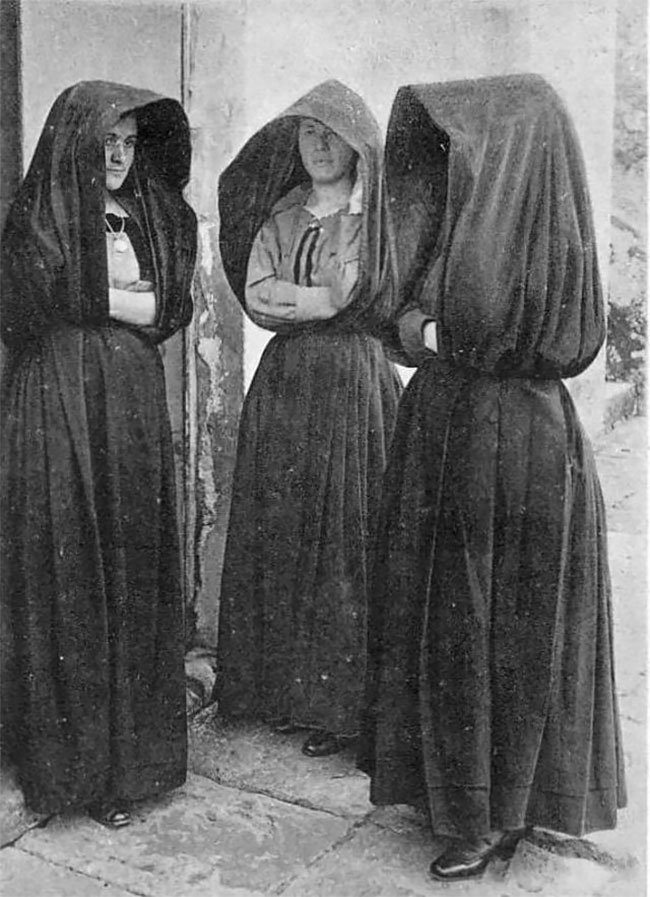 In Mark Twain’s book Innocents Abroad (1869), he makes a ‘fashion review’ of the Azorean Hood: “Here and there in the doorways we saw women with fashionable Portuguese hoods on. This hood is of thick blue cloth, attached to a cloak of the same stuff, and is a marvel of ugliness. It stands up high, and spreads abroad, and is unfathomably deep. It fits like a circus tent, and a woman’s head is hidden away in it like the man’s who prompts the singers from his tin shed in the stage of an opera.”

Here, we gathered some photos of some of them for you to see the various shape and sizes. 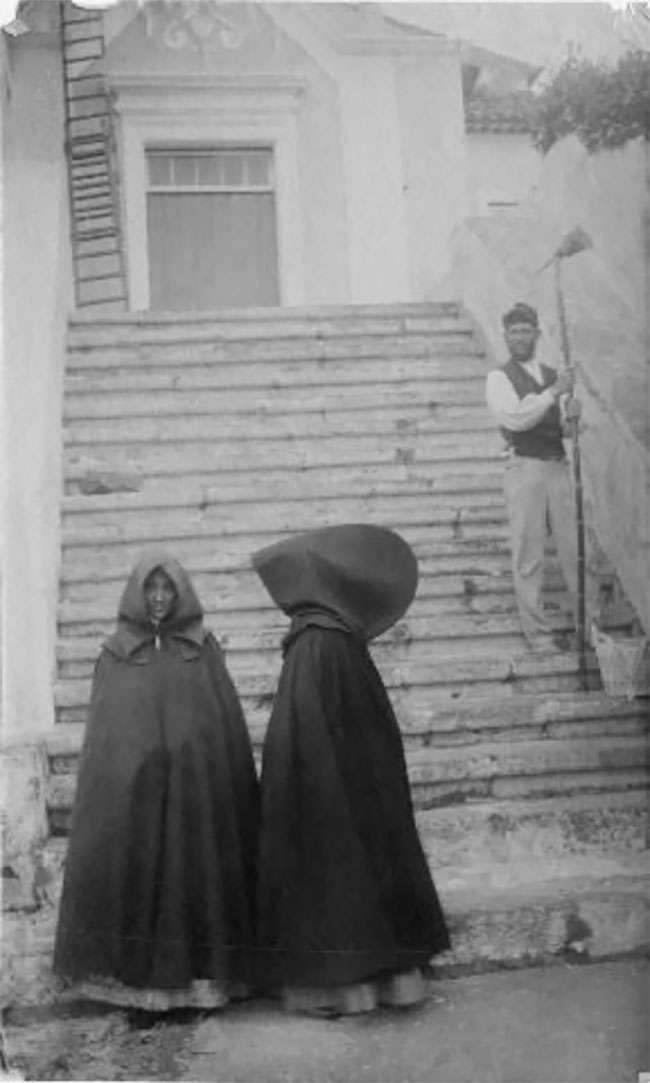 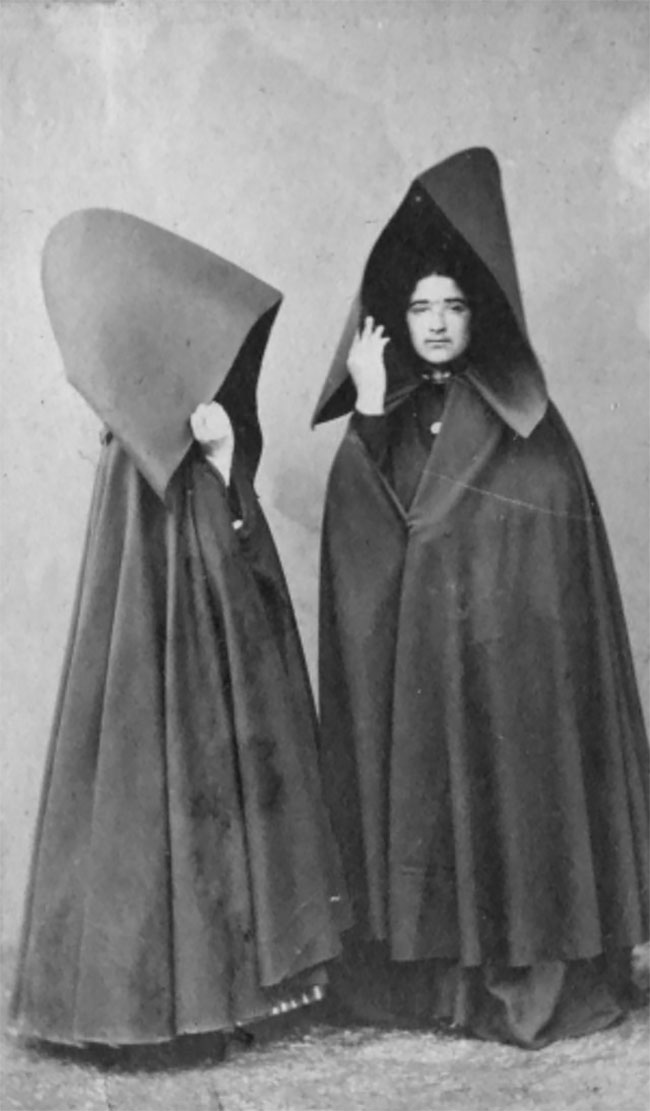 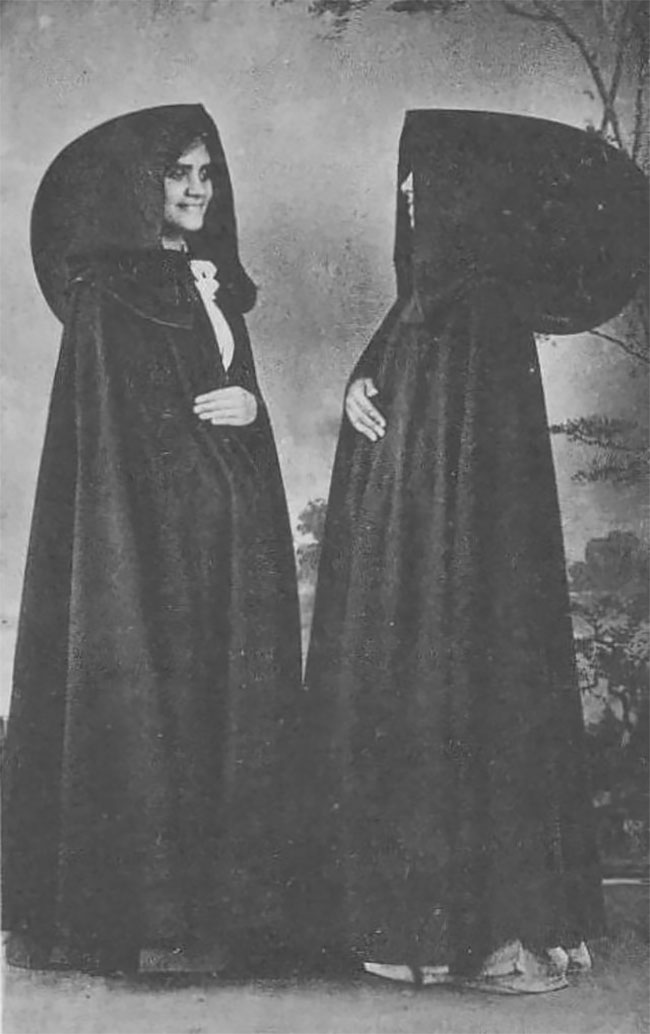 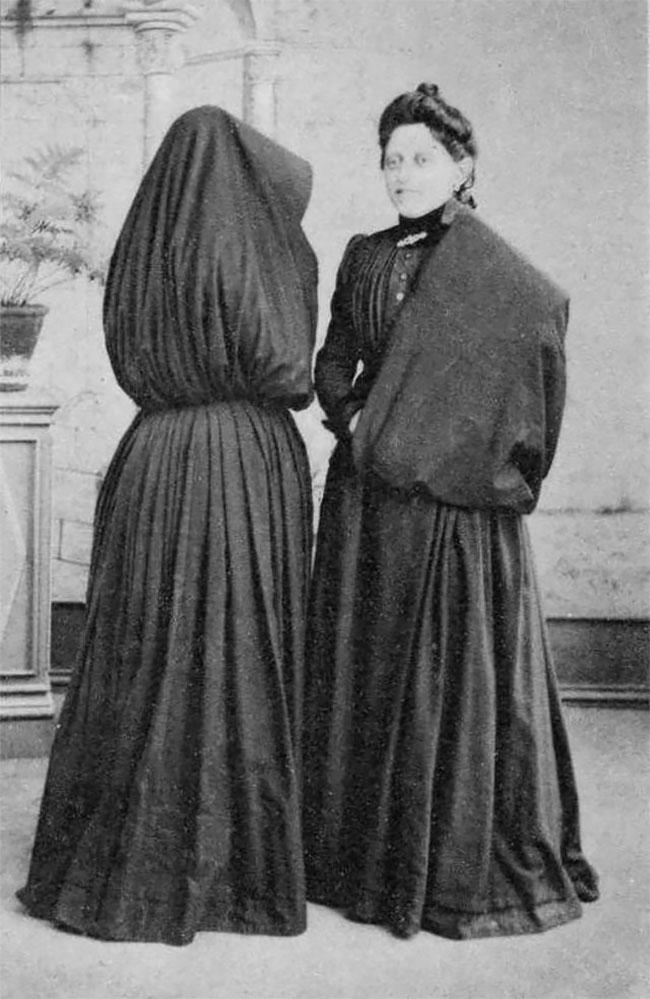 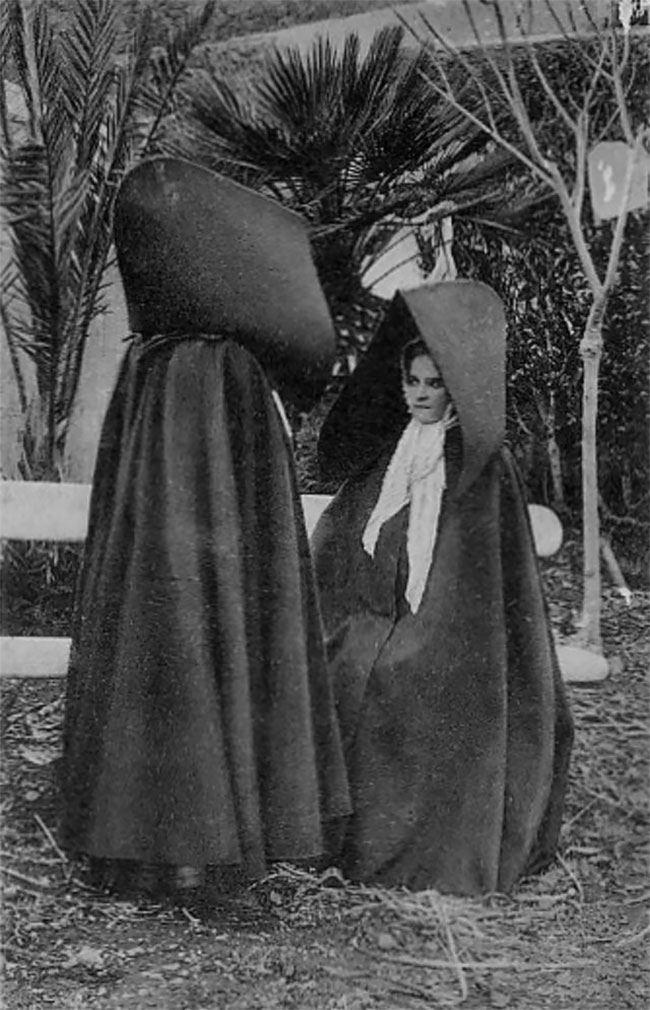 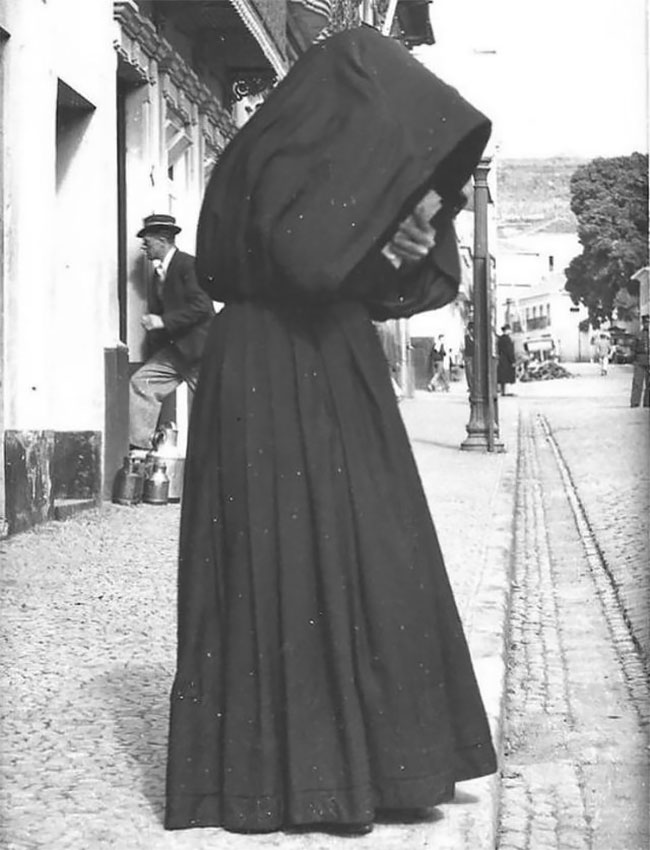 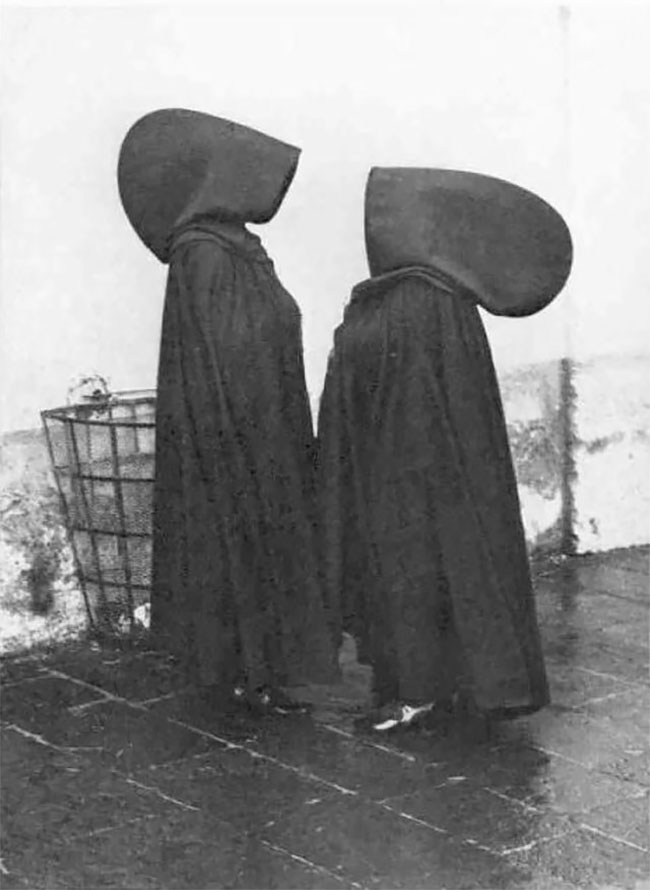 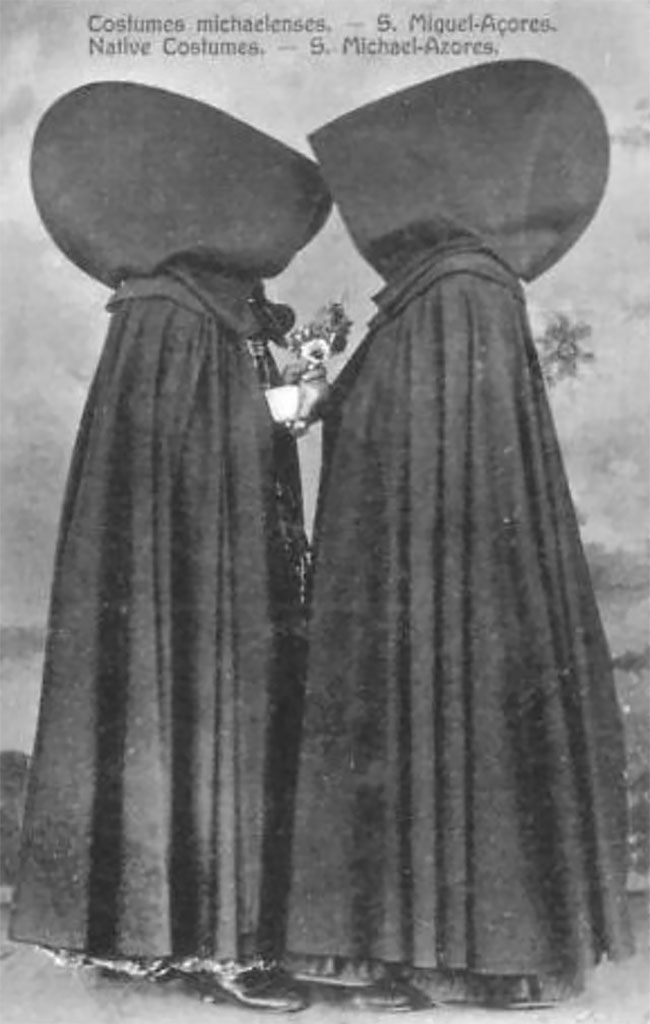 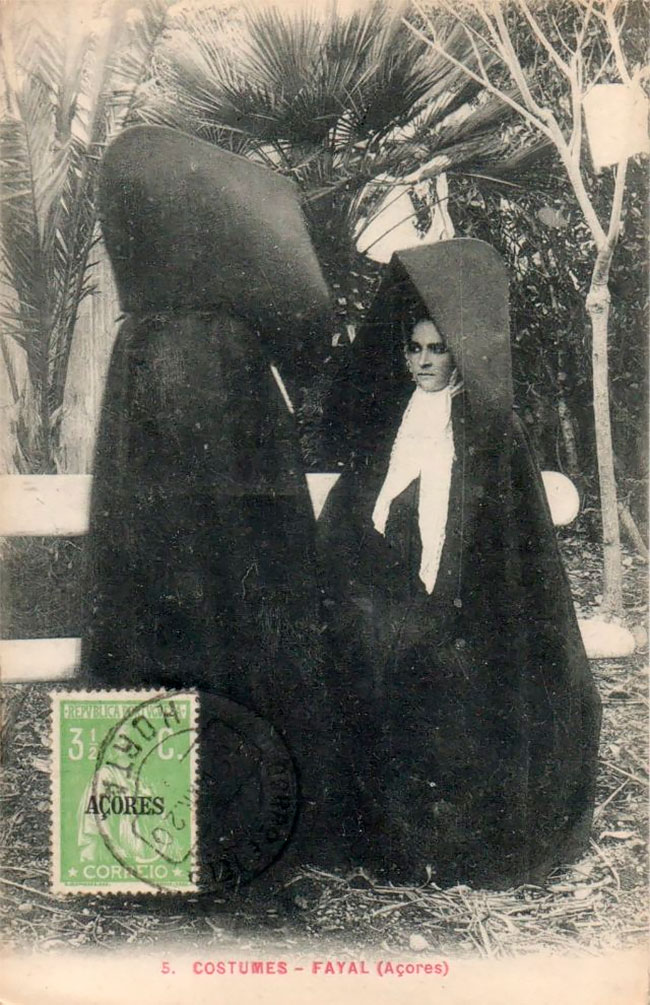 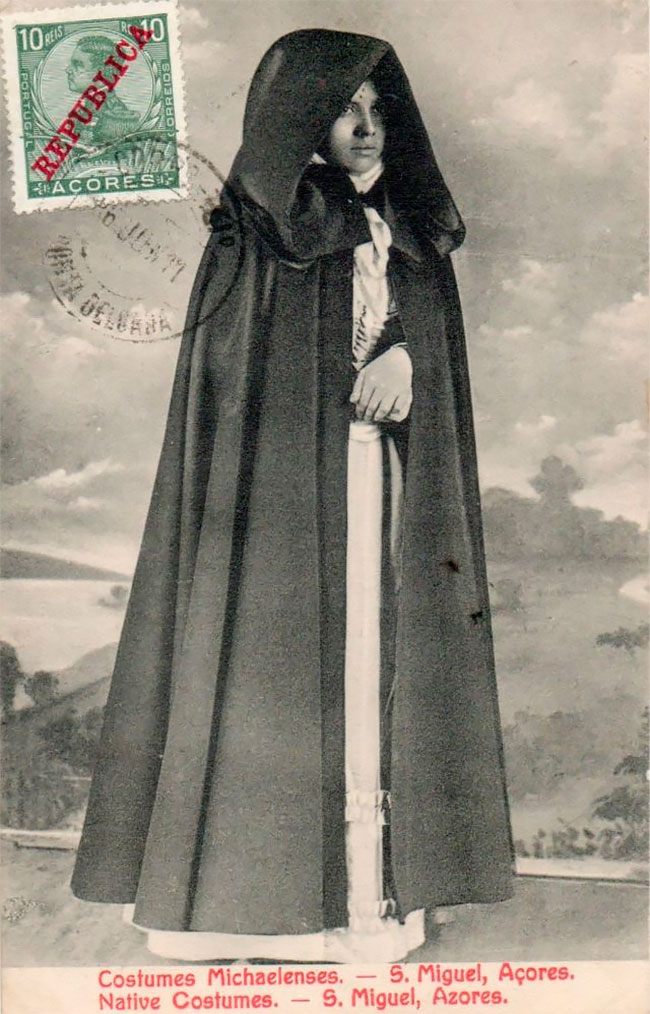 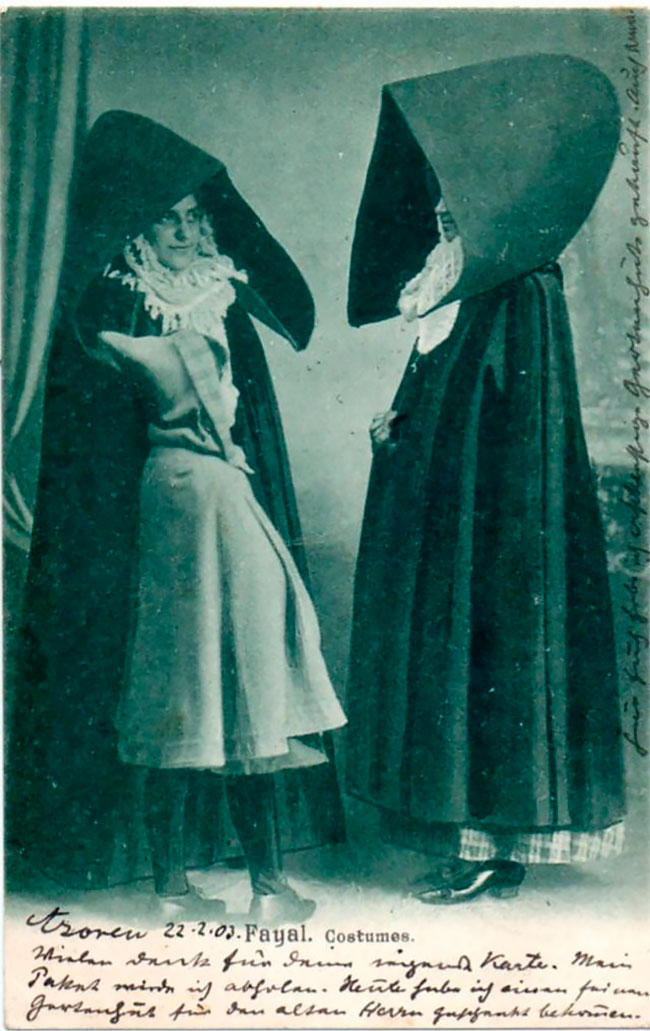 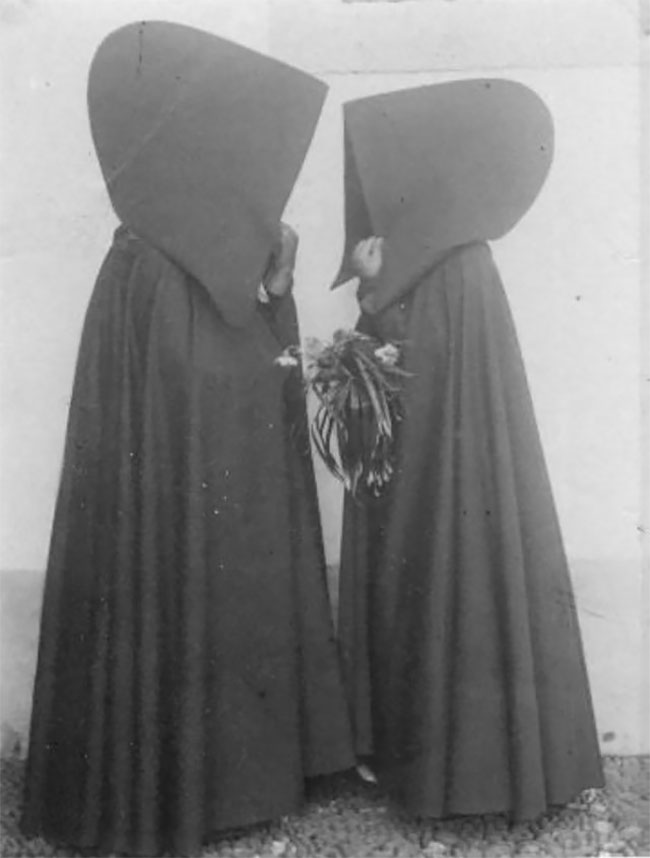 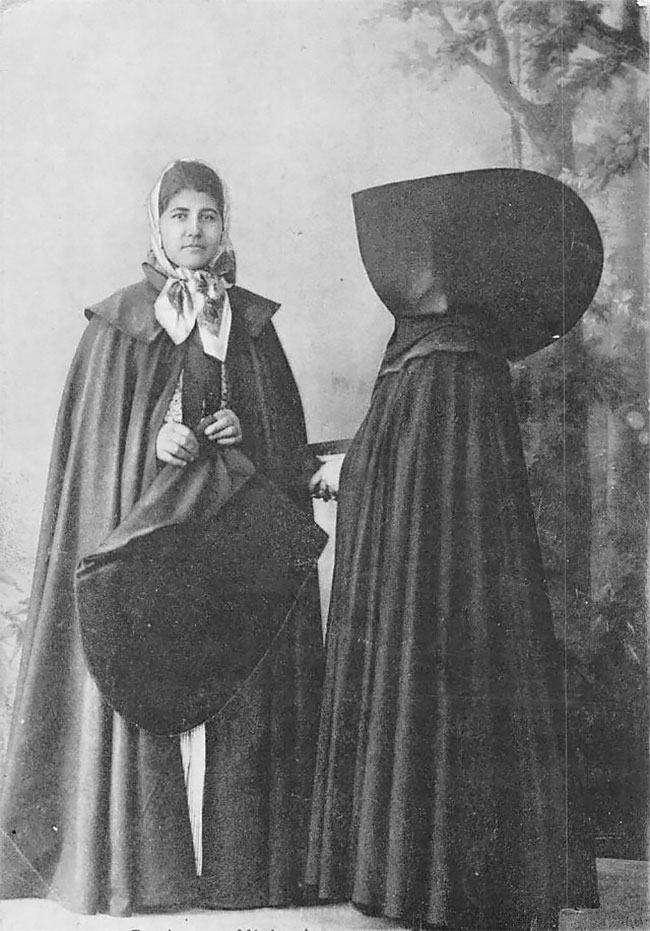 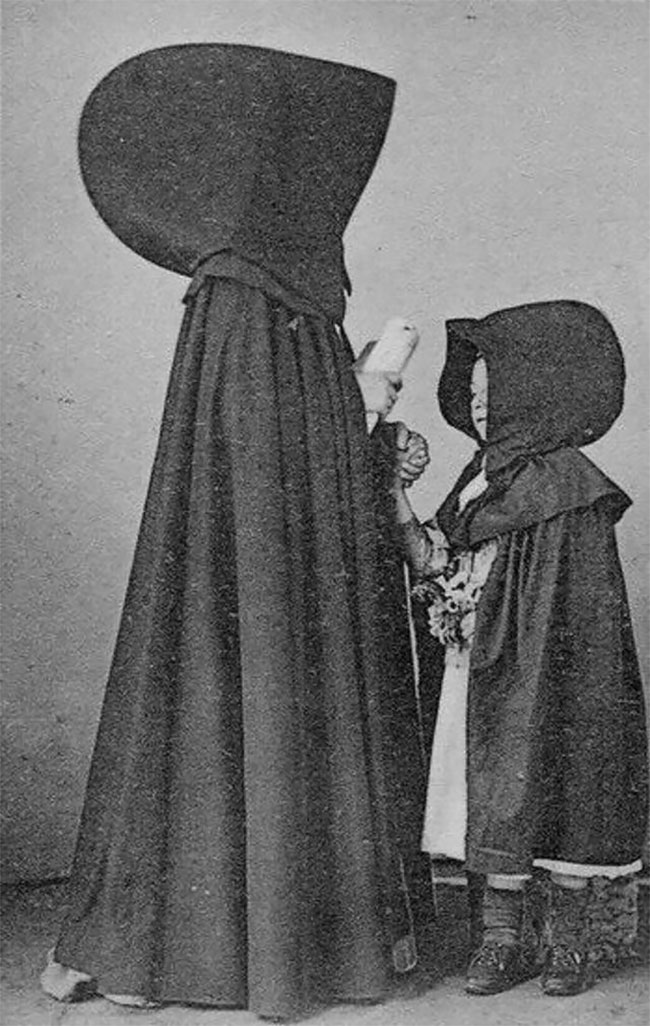 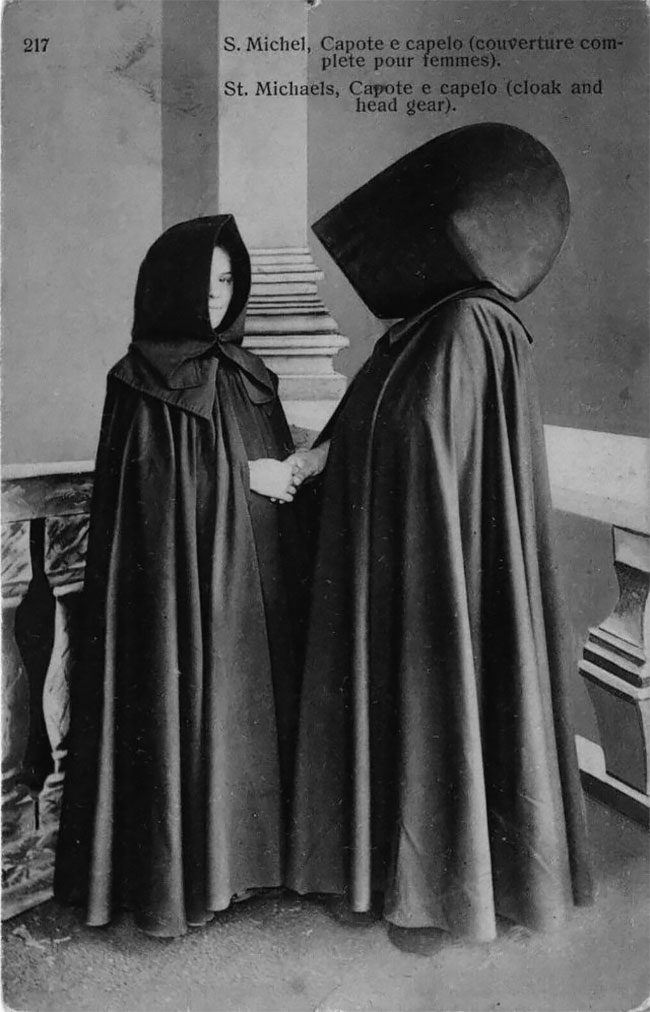 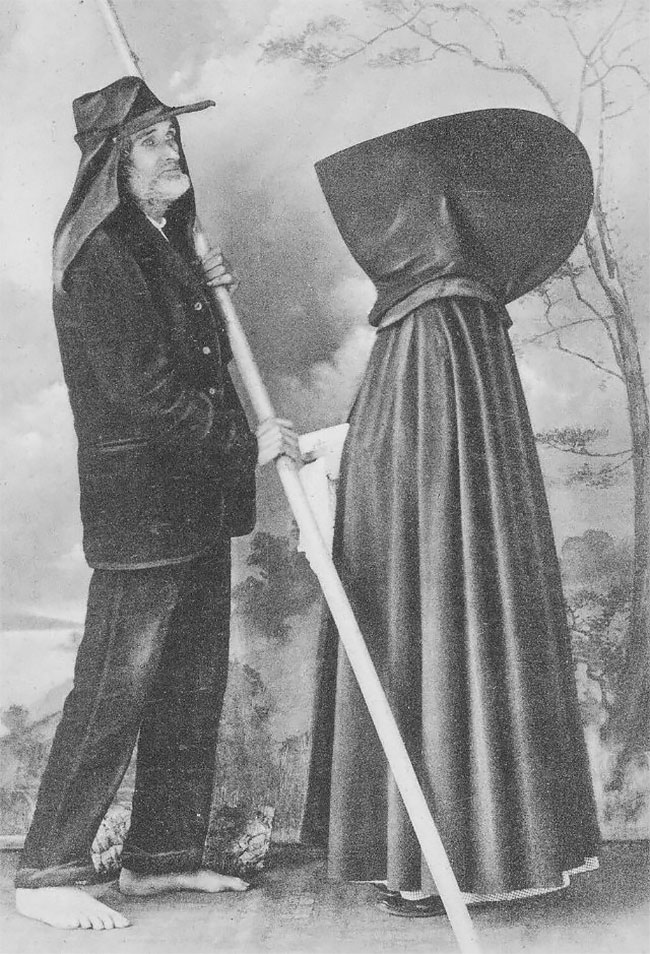 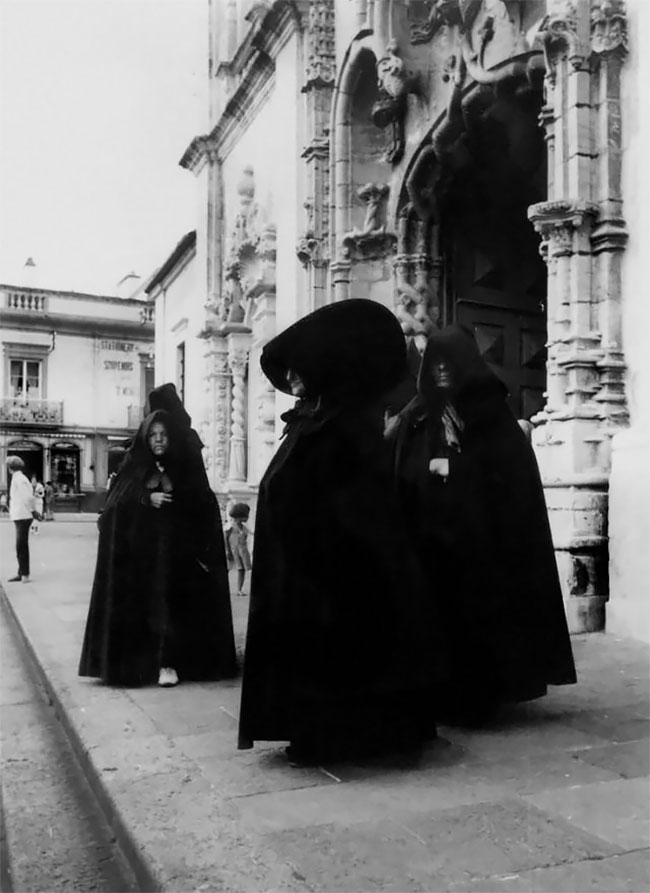 Fun And Creative Furniture Was Designed For These Kids Bedrooms
Bizarre Handbags and Fashion Accessories Created from Roadkill
Artist Spent Over 4 Years Illustrating Dante’s Inferno On Violins
A 19th-Century Vision of the Year 2000
This Stunning Star Wars Livery For LATAM Boeing 777
Trash Fashion Show in Macedonia
Sea Monkeys, X-Ray Specs, and the Twisted Secret Behind Vintage Ads from American Comic Books
Fantastic French Publicity Caravans Of Yesteryear
French Street Artist Takes Recycling To Another Level By Transforming Discarded Mattresses Into Delicious Food Sculptures
Extraordinary Aerial Photographs of London From the 1920s Taken by Alfred G Buckham
The Against The Wall Christmas Tree: Introducing a Christmas Tree That’s Perfectly Fits for Homes with Limited Space
Cool Photos Show Lifestyle of Swedish Youth in the Early 1970s
1977 Pontiac Phantom, the Last Car Designed by Bill Mitchell, One of the Automobile Industry’s Best Known Designers
This Instagram Account Collects The Worst Interior Designs Ideas
Starblazer: Forgotten Fantasy Fiction In Pictures
Artist Arranges Stones In Stunning Patterns On The Beach, Finds It Very Therapeutic
Beehive Hairdo: The Women’s Popular Hairstyle Throughout the 1960s
"Brutal Beauty": This Russian Craftsman Makes Unique Steampunk Art From Steel And Crude Iron
Pageboy: One Of Iconic Women’s Hairstyles Of The 1970s
This Immersive Installation Creates Night View Of Earth
An Artist Has Made A Full-Size Version Of This Nissan Car Out Of Paper
Anonymous Artist ‘Wanksy’ Draws Penises On UK Potholes To Make Government Fix Them
A Slightly Kinder Teacup⁣⁣: A Simple Idea That Works
Cute Illustrations Remind Us Why Pregnant Women Deserve Our Seats More Than We Do
1930s, azores, costumes, fashion, retro, women