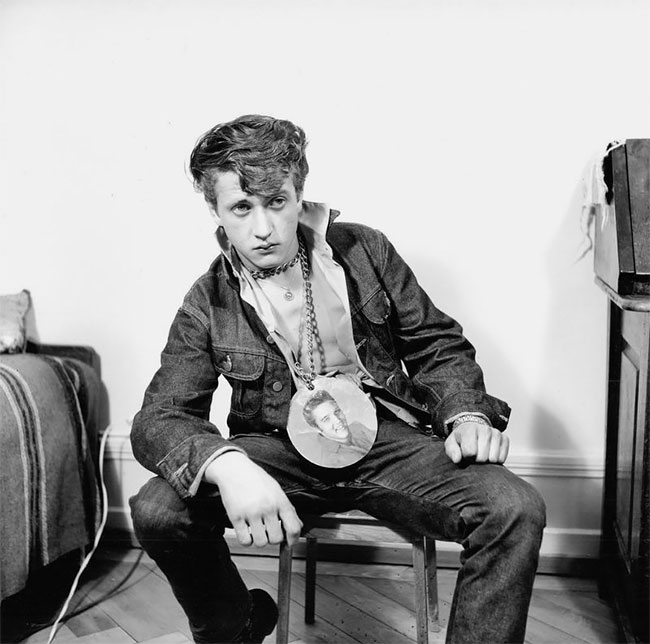 Karlheinz Weinberger (1921-2006). Living in Zurich, Switzerland, Weinberger was a self-taught “amateur” photographer whose day job working in a factory warehouse allowed him to pursue photography seriously in his free time. In the late 1940s Weinberger began to publish his pictures for a gay magazine using the pseudonym of Jim, and later was a freelance photographer for a Swiss sports magazine. Working in relative obscurity, Weinberger produced all the prints featured in this exhibition in his home darkroom, and these have remained inaccessible until recent years.

According to The Selvedge Yard, in 1958, Karlheinz Weinberger met a member of a small band of teenagers and began photographing them both at his home studio as well as at the public parks and carnivals where they gathered. In post war Switzerland, these self-named “rebels” were comprised of working class boys and girls dissatisfied with the conservative and conforming culture of the day. Inventing their own code of behavior and dress they affected a powerful gang identity expressed by an affinity for like-minded American imports such as James Dean, Elvis, blue jeans and motorbikes.

Later, in the mid-60s, the rebels dissipated both physically and in spirit, while others carried on their youthful resistance to the status quo, forming clubs of “rockers” and “bikers” that Weinberger followed with his camera on their outings into the Swiss countryside. Their retreat from the urban setting to a self-imposed isolation in nature embodied a more inward revolt, one of self-destructiveness and self-mutilation. 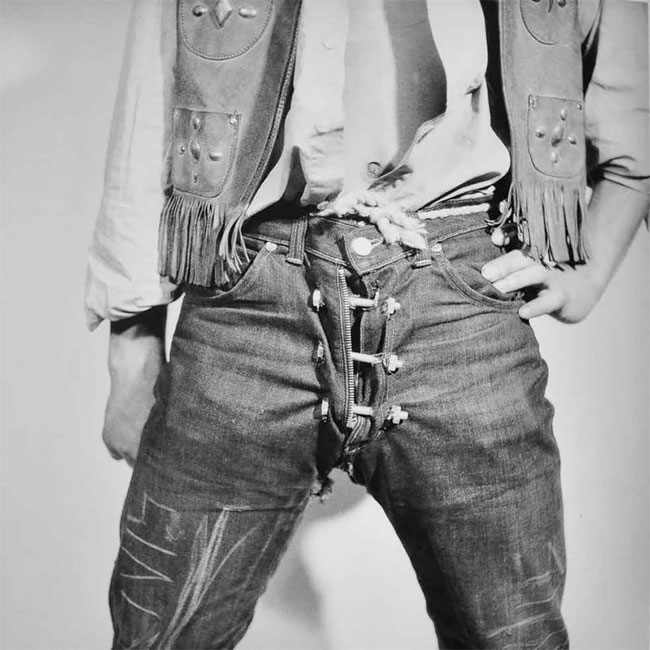 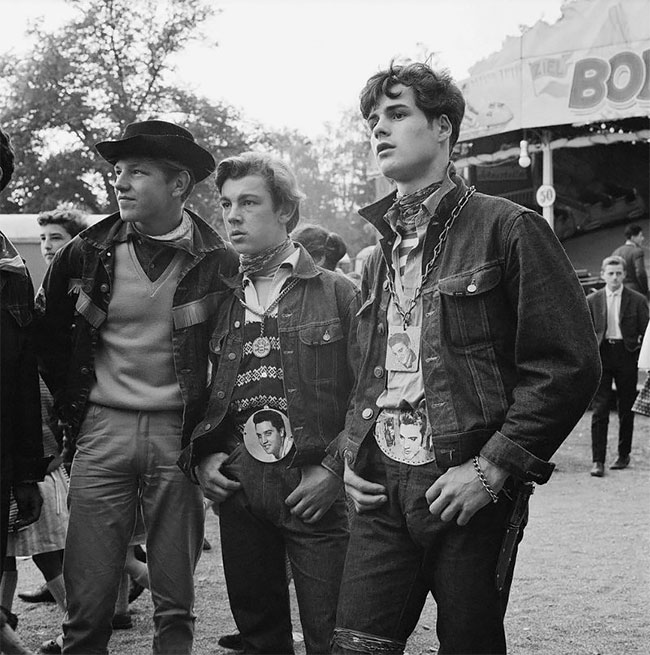 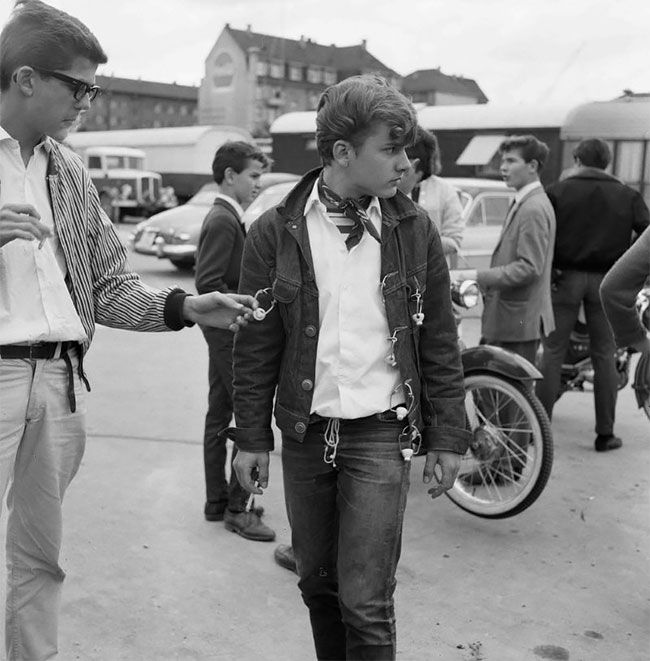 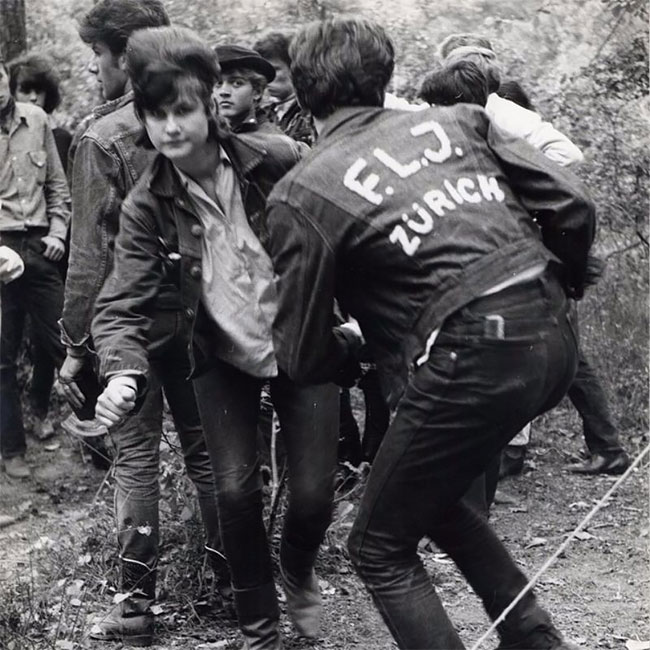 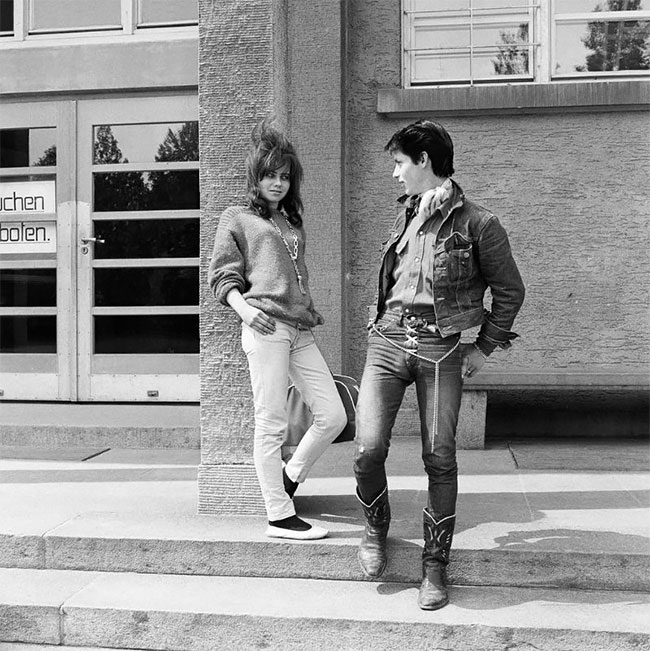 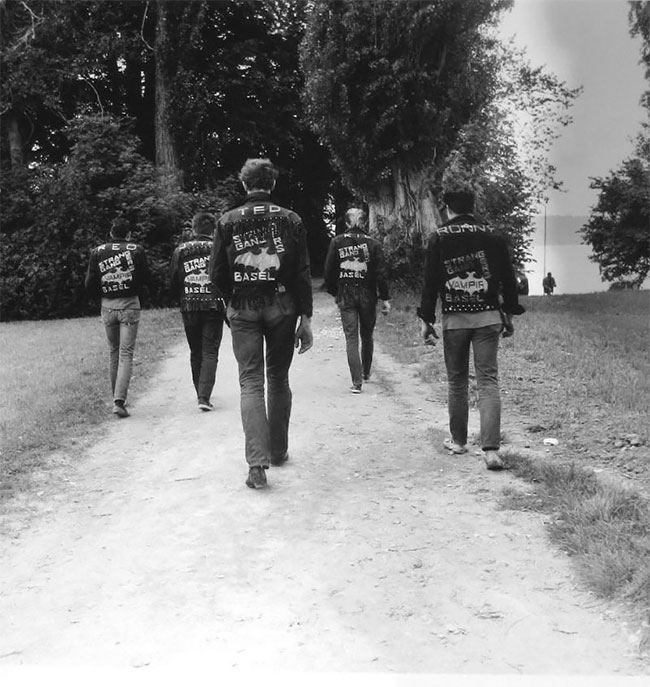 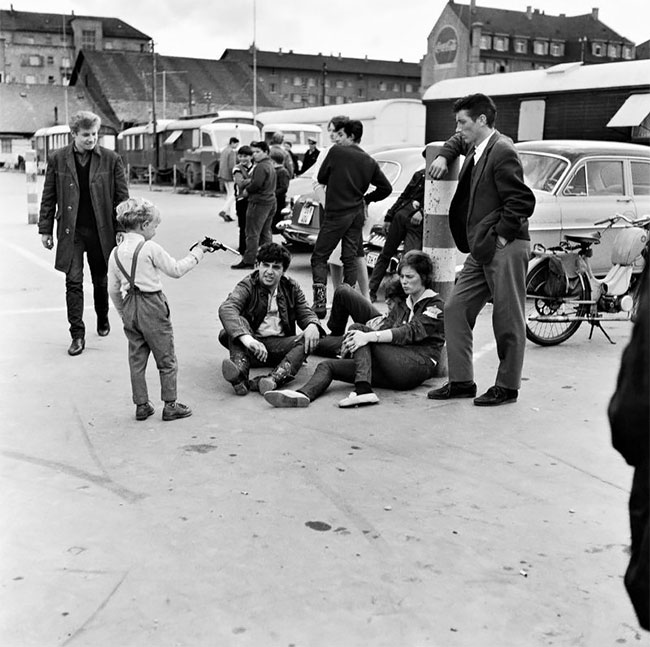 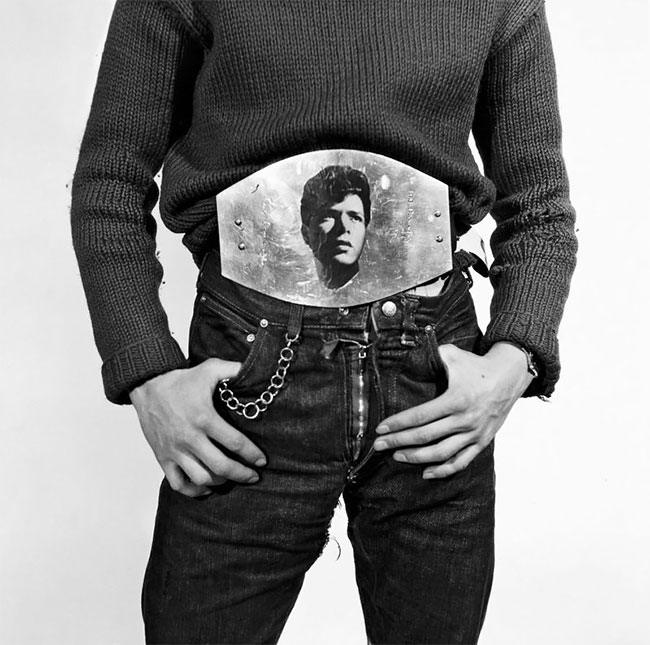 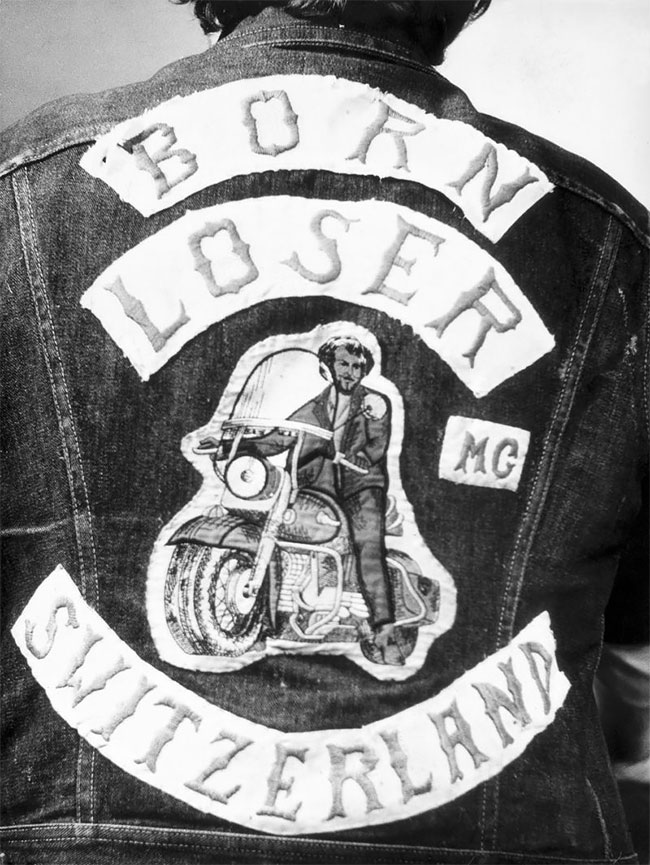 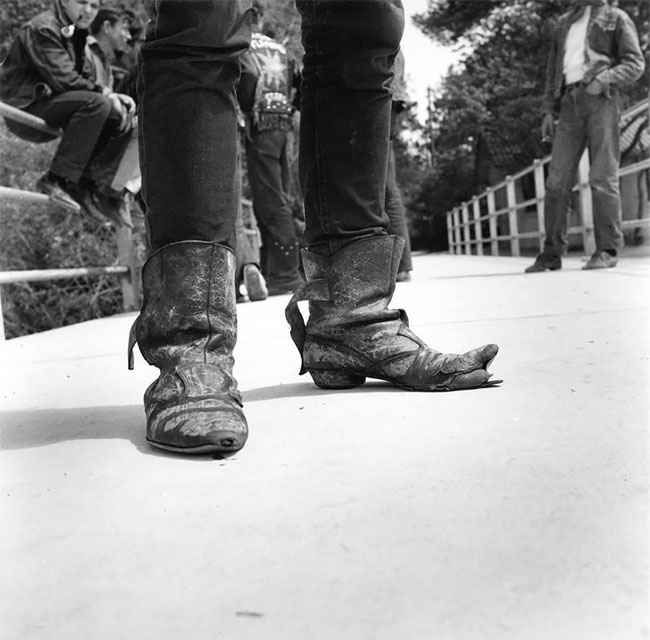 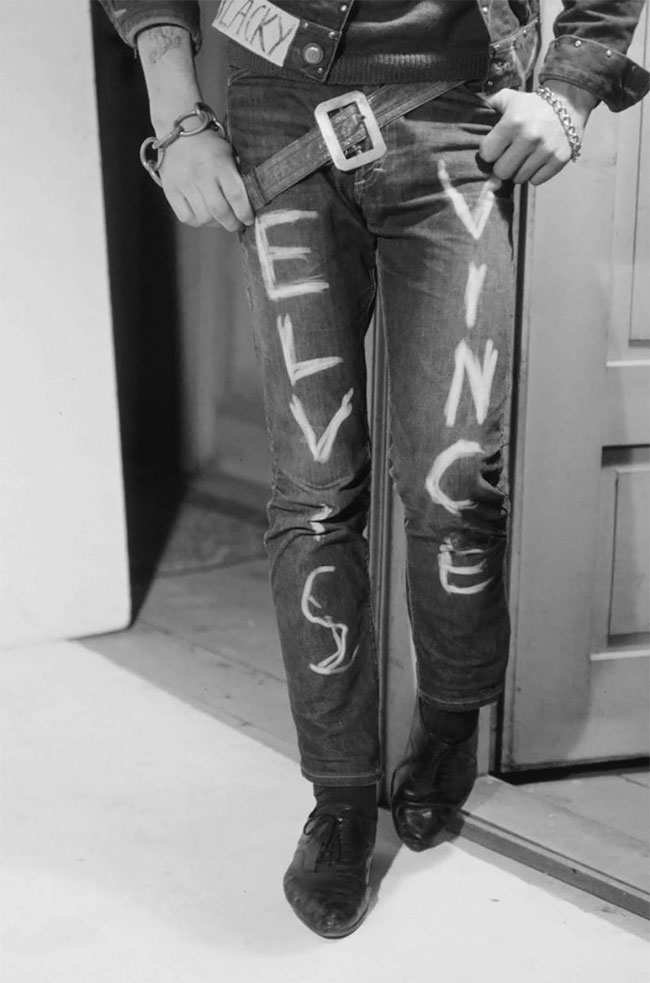 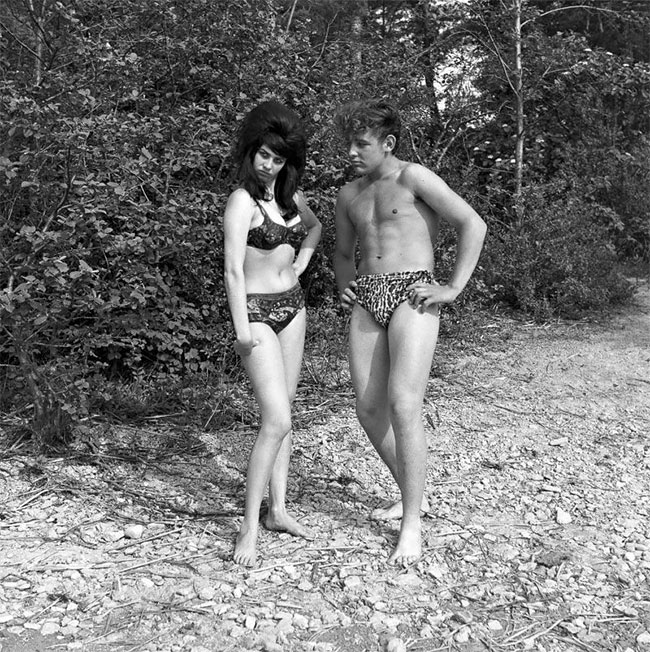 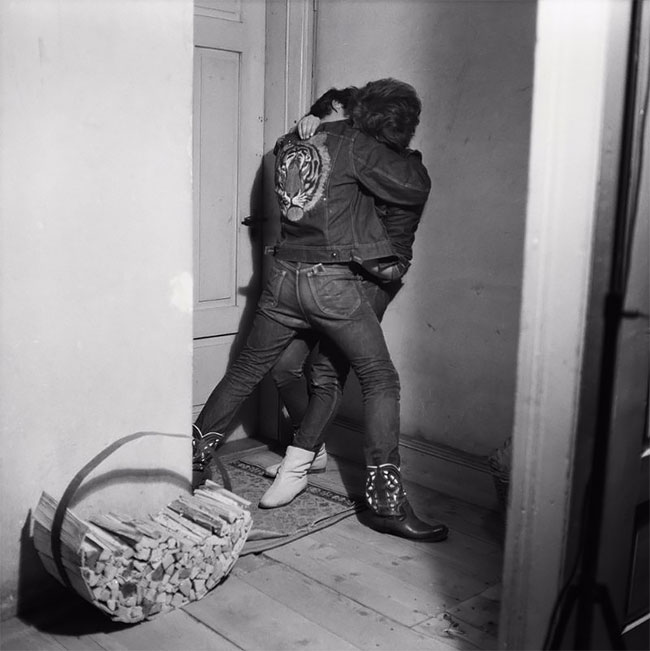 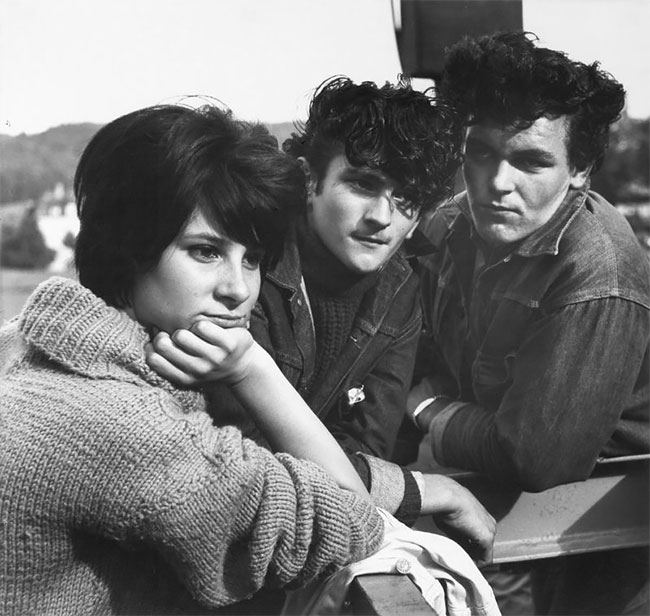 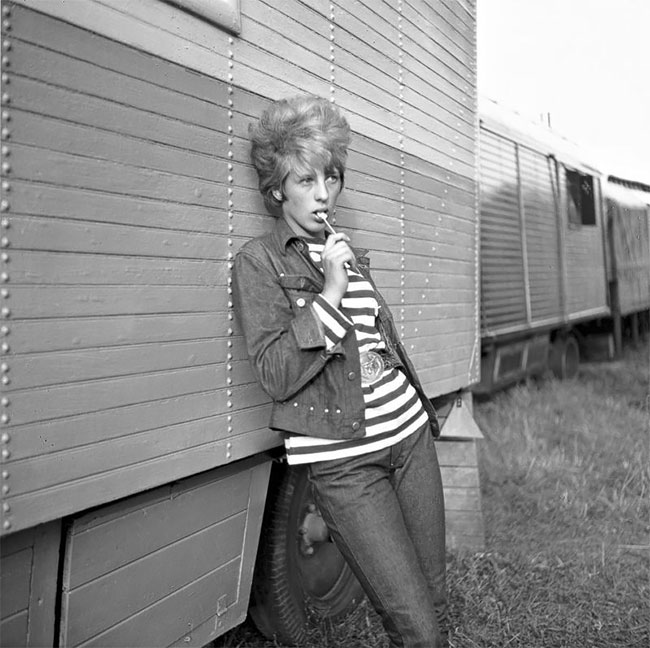 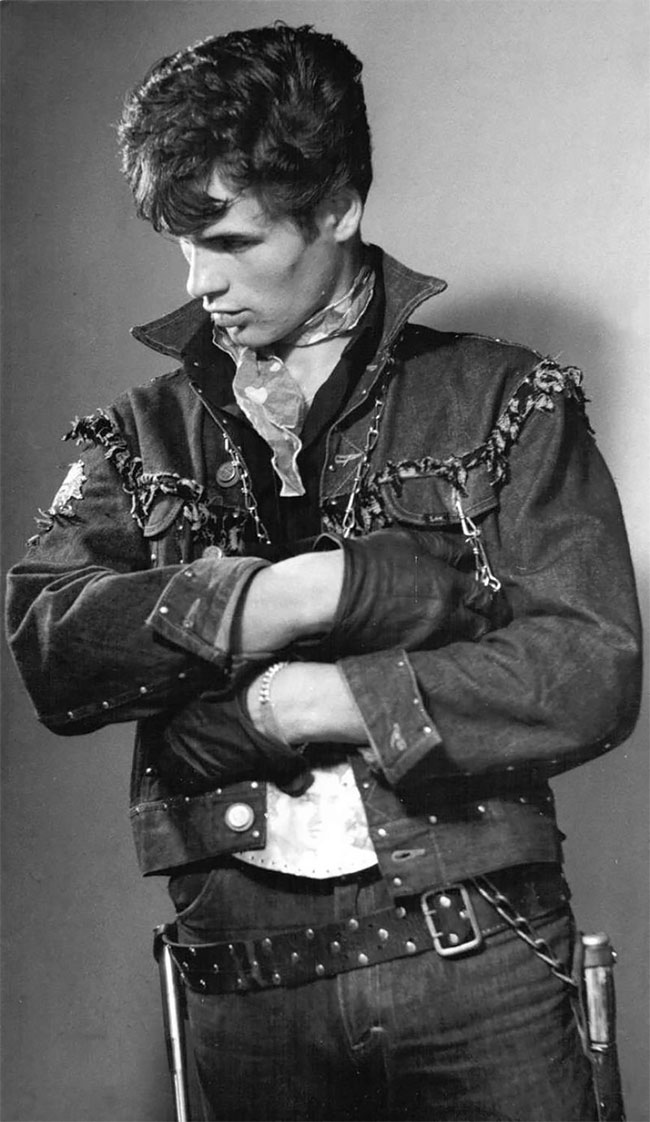 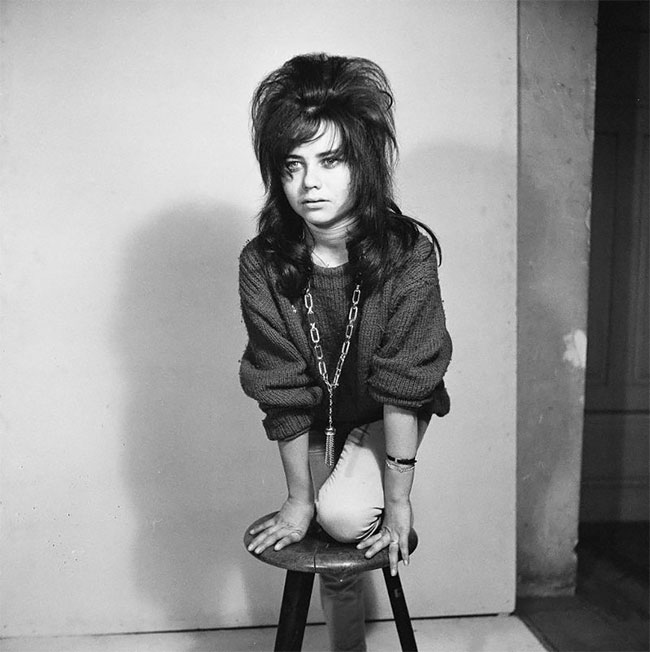 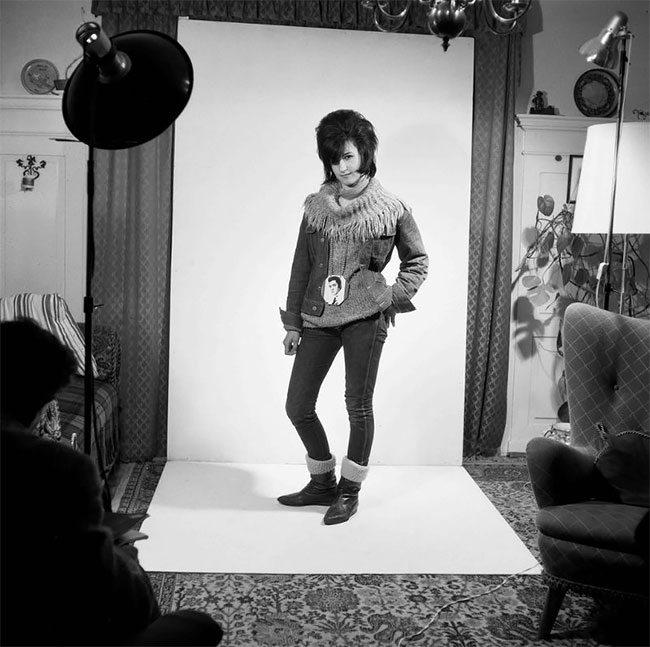 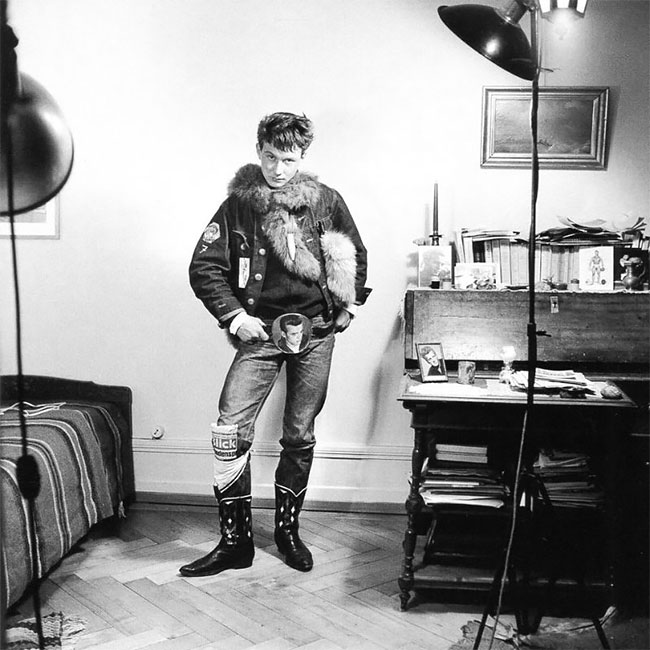 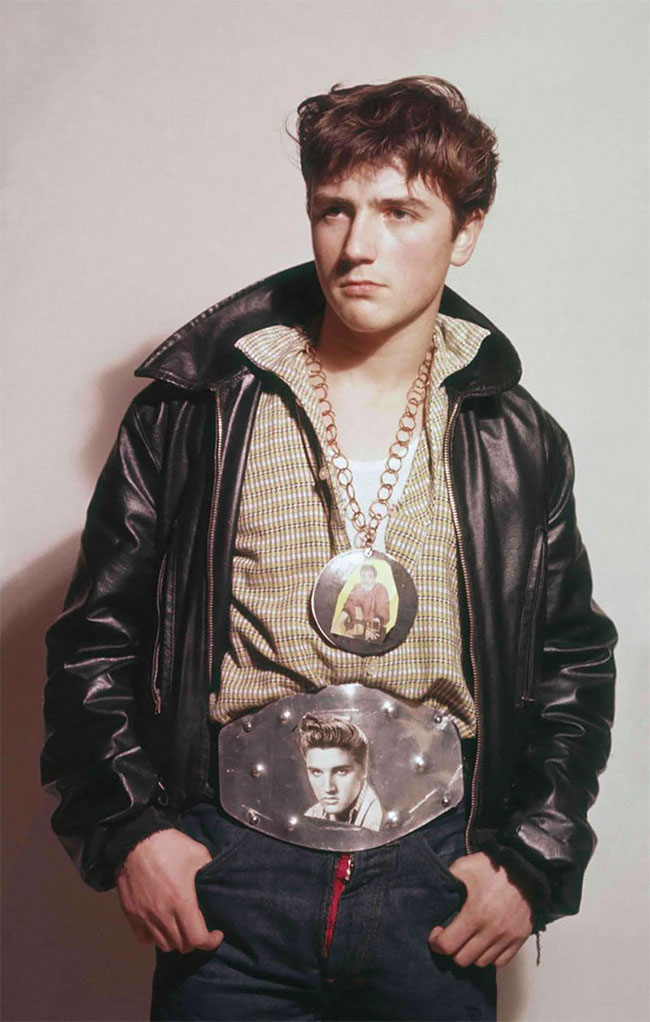 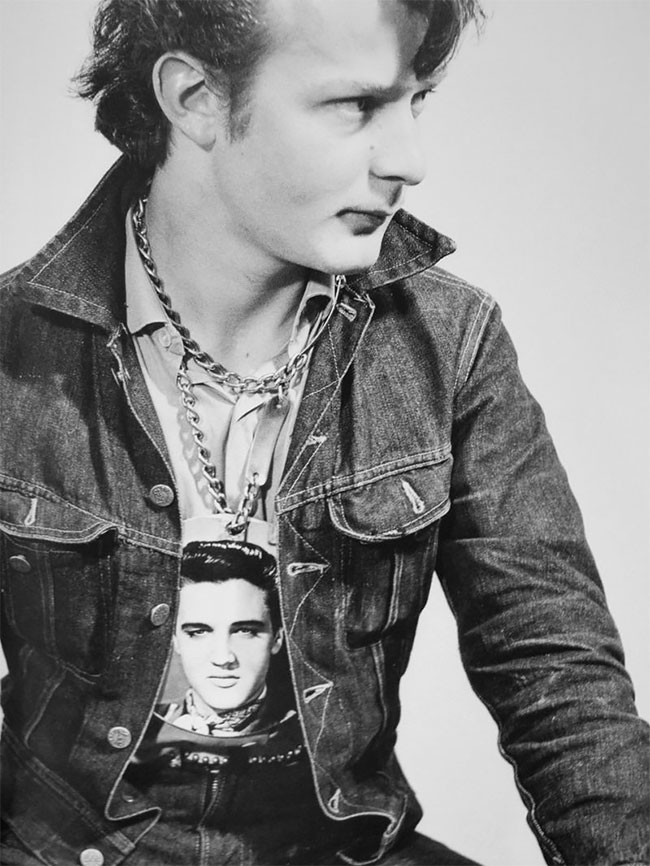 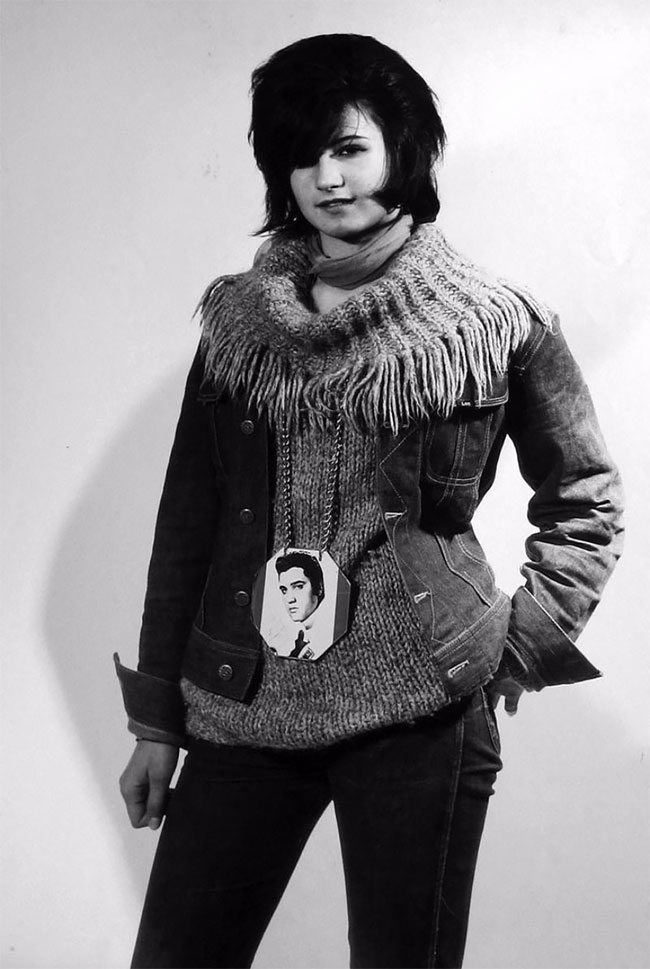 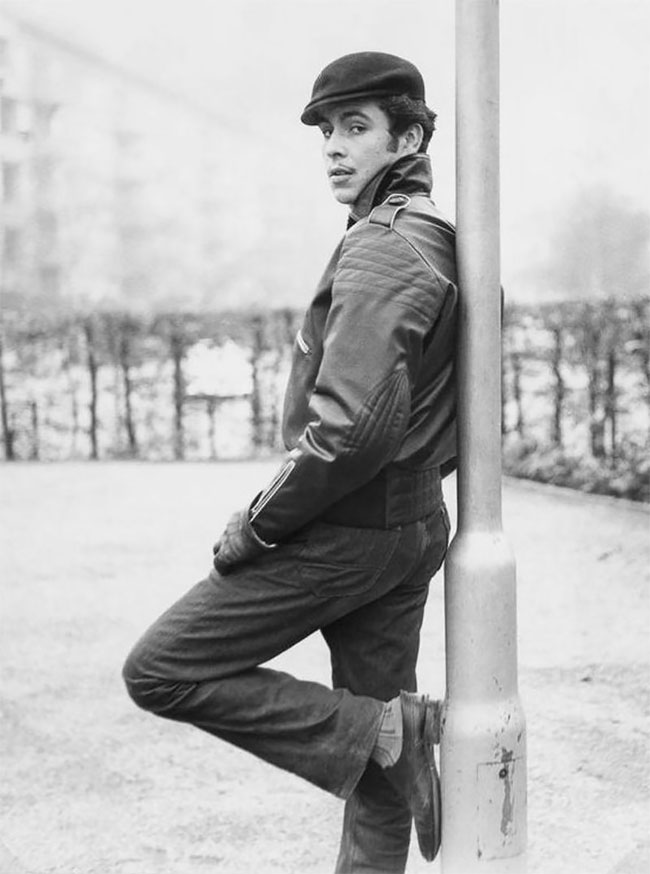 This Guy Shoots Awesome Wildlife Photography... From His Bedroom
Guy And Pug Take Couply Photos Cuz Sometimes Your Dog’s Your Valentine
Someone Is Showing That All Instagram Photos Are Starting To Look The Same And It’s Pretty Freaky
Controversial Walking Dead Photo Shoot Gets People Talking
Living With Lion Cubs
Thai Woman Creates Hilarious Instagram Vs. Reality Collages
People of 'Porte St Denis' by Johan Berger
Mixed Blood
2013 Pictures of the Year from Agence France Presse
Mike's Motels 1974: Atmospheric Retro Photos of the Roadside Motels by Mike Mandel
Trapped In The 1930s: Artist Draws Popular Characters In Rubber Hose Style
The Pro Tip Of How To Create A Sexy Picture By The Pool
Graceful Dancers Practicing Out In The City Streets Captured By Melika Dez
Drug Awareness: Rare And Haunting Photos Show Drug-Addled Men And Women Lying In The Opium Dens Of 19th Century America
This Baby Girl Has An Inoperable Brain Tumor, So Her Parents Did A Photoshoot To Show Their Love
Japan’s Hottest New Instagram Model Is An 84-Year-Old In His Grandson’s Clothes And He Looks Amazing
Unique House for the Atomic Age from 1953
Small is Beautiful!
This Man Took A Photo Every Year With His Son For 30 Years
The Best Winning Photos From The iPhone Macro Photography Challenge
Texas Tech University’s Yearbook Featured Their Female Students As Playmates For 20 Years
Photo of the Day: Hard-working
Mexican Pointy Boots: Las Botas Picudas
Photographer Kourtney Roy Makes Eerie Self-Portraits In Desolate Yet Dramatic Locations
defiant, document, photographs, street, styles, vintage

Photographer Puts Everyday “Selfies” to Shame, Part 2
Olivia Wilde for Modern Luxury
September 21-22: These Days in Photos from the Past
"Celebrated For You": The Birthdays Of Hollywood Directors
See How the Hollywood Sign Has Changed from between the 1920s and 1970s
Charlize Theron and Michael Fassbender
Floriade 2012: World Horticulture Festival
Shocking Before and After Composite Portraits of Drug Abuse
Moody Street Photos Of London After Dark By Luke Holbrook
Beautiful Redhead Female Portraits by Maja Topčagić
2007 ‒ 2022 by Design You Trust. Proudly hosted by WebHostingBuzz.
Privacy Policy · Terms of Service · Content Removal Policy ❤️ 🇺🇦